Category
Art & Aesthetics
Intimacy
Suffering & Violence
Generation
by Sarah Lester
Published: Oct 02, 2013
Standfirst
LONDON: Since exhibiting together at a group show at the Crypt Gallery beneath St.Pancras Church in 2011, Massachusetts-based sculptor Rosalyn Driscoll and Czech filmmaker Tereza Stehlíková have combined their artistic output to create a dream-like underworld all of their own.
Body 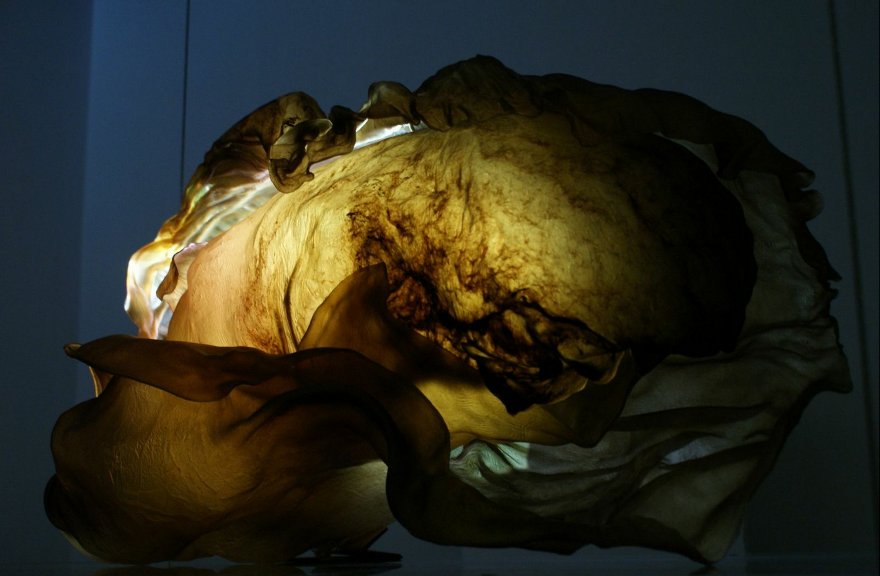 Rawhide sculptures and film footage may seem like unlikely bedfellows, but sculptor Rosalyn Driscoll and filmmaker Tereza Stehlíková have combined the two mediums to stunning effect in their collaborative new work Generation. Inspired by the myth of Demeter and Persephone, the two artists from Sensory Sites - a collective committed to re-integrating the senses into art – have created a series of beguiling, at times unearthly, video-sculptures.

Using their own experiences of motherhood and (grand-) daughterhood to respond obliquely to the story of the seasons as told in Ancient Greece, (where the daughter of the Goddess of Fertility and Agriculture was abducted by Hades for six months of the year), the sculptor-filmmaker duo have forged a surprisingly fecund and fantastical underworld of their own creation.

Even without the added trauma of kidnap, the mother-daughter relationship is a complex one. From motherhood, when a woman reaches out beyond her own individual life, through the act of separation at birth, to the daughter’s witnessing of the eventual decline of her mother’s sensory perceptiveness in old age, the cyclical nature of life and death is presented here in all its fleeting complexity. The occasional but overpowering smell of dead cow-skin (indistinguishable to my untrained nose from that of a tannery) which wafts from certain sculptures acts as an effective sensory reinforcement that all things must pass.

Even without the added trauma of kidnap, the mother-daughter relationship is a complex one.

Mirroring the corresponding order and chaos of world and underworld at street-level the exhibition presents a contained and benign film of fields of haystacks in Bohemia. Cleanly shot and conservatively framed against a plain white wall there is little to hint at the lawlessness that lays in wait beneath.

Just beneath the pavements of Chiltern Street projections of four female generations of Stehlíková’s own family refract through, between and upon Driscoll’s fleshy, intricate, yet solid structures. As a fetus responds to the light that shines through their mother’s abdomen, the sculptures are animated and transformed by the moving images; dead animal skin captures transient glimpses of life in ever more fascinating ways.

Incorporating paper, beeswax and rawhide (procured from the aptly named Hereford, Texas) Driscoll’s maverick screens range from conch-like structures that approximate the folds and layers of intricate internal organs to shallow, circular winnowing baskets. Whether suspended in mid-air or presented on a glass plinth like a freshly abandoned giant chrysalis, it becomes increasingly difficult to discern whether Stehlíková’s ephemeral moving images are metamorphosing the still skin of Driscoll’s strange receptacles, or if the crevices, hue and irregular form of Driscoll’s sculptures are transforming the original content of Stehlíková’s film.

Does the amber-like glow emanate from the filmed footage of bees at work or from the material of the sculpture itself? The synthesis is so complete, the surface and interior so deeply embroiled, that it really does become impossible to tell.

Generation is at GV Art, London until 5th October 2013.
www.gvart.co.uk