Surviving in the Multidimensional Space of Cognitive Dissonance

Category
Art & Aesthetics
Architecture & Planning
Ecologies
Surviving in the Multidimensional Space of Cognitive Dissonance
by Ryota Matsumoto
Published: Jun 24, 2017
Standfirst
Ryota Matsumoto is an award-winning Japanese architect and artist whose devout straddling of the two fields, and hybridity in general, has produced some extraordinary images, often accompanied by explanatory text, as we present here. His subject of interest are morphological transformations of our ever-evolving urban milieus. What interests us particularly are his reflections on the relationship between species and habitat — ecology — and how he attributes urban transformation "to a multitude of spatio-temporal phenomena influenced by social, economic and cultural factors," upon which the images below are visual commentaries. The text below, from a lecture at Cornell University, though dense and technically demanding, is, in our view, a sort of mirror held up to the images: both seem to request that the viewer return again and again to plumb their depths. ¶ This three-part series of visual essays, ‘Notes on the Genealogy of Cities,’ began in 2016 in the Journal of Wild Culture to showcase Ryota's visualization of predominant themes shaping present-day cities beyond conventional architectural and artistic protocols. For a comprehensive artistic statement, see part 1 in the series (link below).
Body

The global flow of data — and globalization via technological and economic information exchanges — has promoted dislocation, fragmentation and uncertainty among the population, thereby creating a regressive shift synchronous with the accelerated urban sprawl.

The issues of exponential population growth and global-scale development undermine the very foundation of all life on earth. While nation-state-based democracies are in decay and the globalized economy collapses in the post capitalist society, information technologies merge with various disciplines: molecular biology, particle physics, neuroscience and a host of symbiotic innovations in the dawn of the post-human paradigm. To grasp the effects of this coalescence, we need to look beyond the entangled network of social informatics in order to envision new patterns of socio-technical relations. Moreover, with this envisioning we need to consider the conjectural approach of hybrid urban space and its integration of organic and artificial constructs—as configured by designers, architects and scientists alike. In my view, the latter see the possibility of cities transforming themselves as the matrix of self-generative entities of intricate consciousness in the post-human age.

Obsolete infrastructures provide the context in which new biosynthetic systems can act as extrinsic factors for mutating and augmenting their innate abilities.

Through a series of conceptual drawings, my artwork reflects the morphological transformations of our ever-evolving urban and ecological milieus. These cycles of socioeconomic evolution are attributed to a multitude of spatio-temporal phenomena influenced by social, economic and cultural factors. As Colin MacFarlane proposed in his interpretations of cities as global urban assemblages, perpetually going through reconfiguration with emphasis on the relations between sociality and spatiality at different scales, the urban environment can be defined as a multiplicity that is in the state of perpetual change in conjunction with socio-spatial alignment. My vision of future cities addresses critical sustainable issues in response to speculative changes in notions of societies, cultures and ecosystems, and particularly in the transient nature of constantly shifting topography and geology. 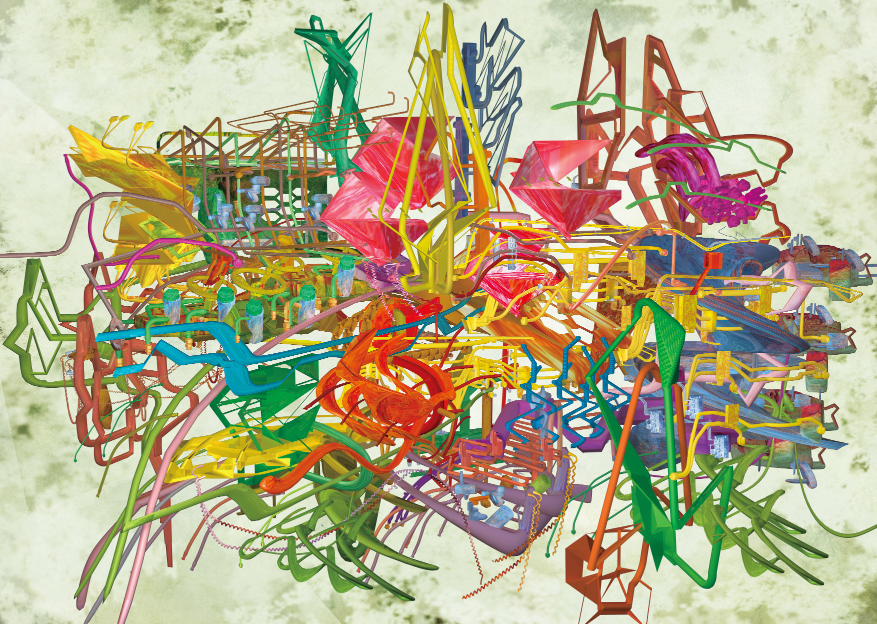 The themes of my work hinge on how the scientific tenets of trans-humanism, the emergence of synthetic biotechnology and Nano technological innovations might respond to the Anthropocene epoch, and, eventually foster critical thinking in relation to the underlying agendas of the increasing dominance of human-centric biophysical processes and the subsequent environmental crisis. The dynamic interplay between the biomorphic artifacts of advanced technologies and existing obsolete infrastructures is considered the catalyst behind establishing my own conjectural approach to speculative urbanism. In short, the interplay between the present set of socio-economical relations and their potential for transformation are taken into consideration for the future vision of ecological cities. 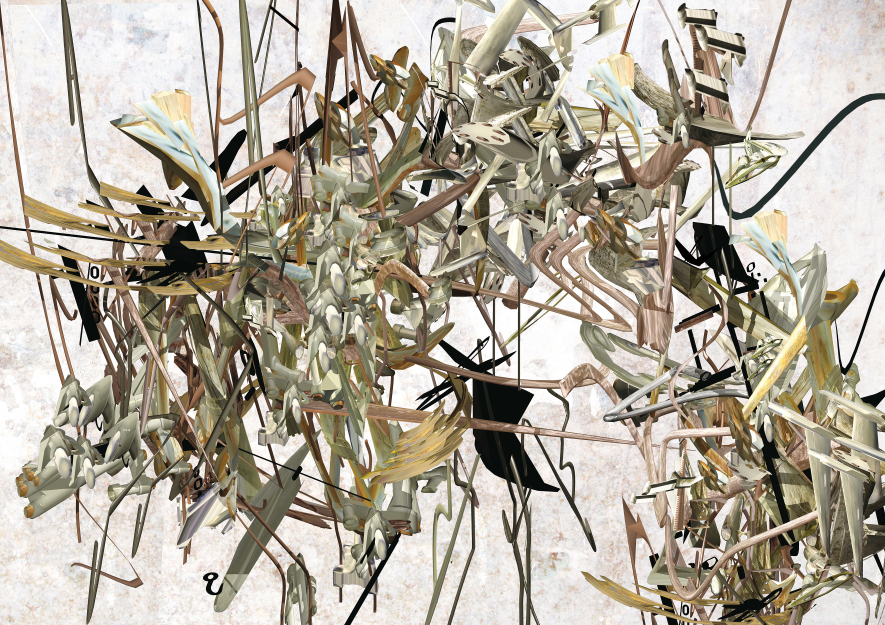 While taking multiple possible permutations of ecological configurations into account, I envision the potential scenarios of smart cities of the post-human age wherein the optimum design of cities is determined through the flow, exchange and interbreeding between organic and non-organic actants in place of nested binary zoning regulations. As a result, the intercommunal dynamic and accelerated interdependency between living, non-living and hybrid actants facilitates the sustainable development of post-human urbanism. 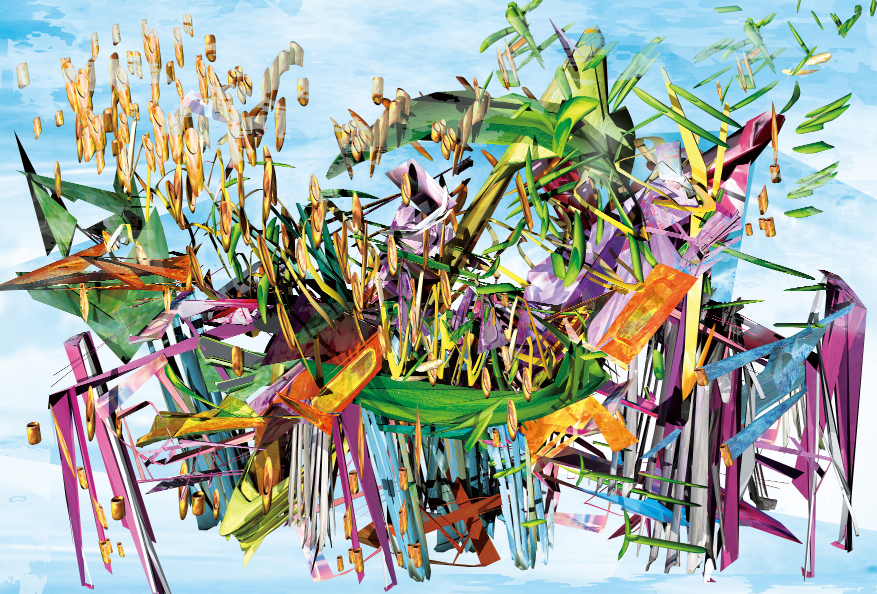 In my proposed urban growth model, The Multidimensional Space of Cognitive Dissonance, the matrix of synthetic evolution is characterized by self-organization and symbiosis. In the model, the urban substructure is comprised of biosynthetic built systems containing gene expression machinery that displays life-like behavior, which allows self-replication rather than reproduction in post-biological utopias. The clusters of bio-based phase-shifting cellular structures emerge through the process of symbiogenesis, and become dominant components of urban tissues that constantly self-organize and cross-fertilize to replicate semi-living urban agglomerations in a state of constant flux. Obsolete infrastructures provide the context in which new biosynthetic systems can keep away from the equilibrium and act as extrinsic factors for mutating and augmenting their innate abilities. 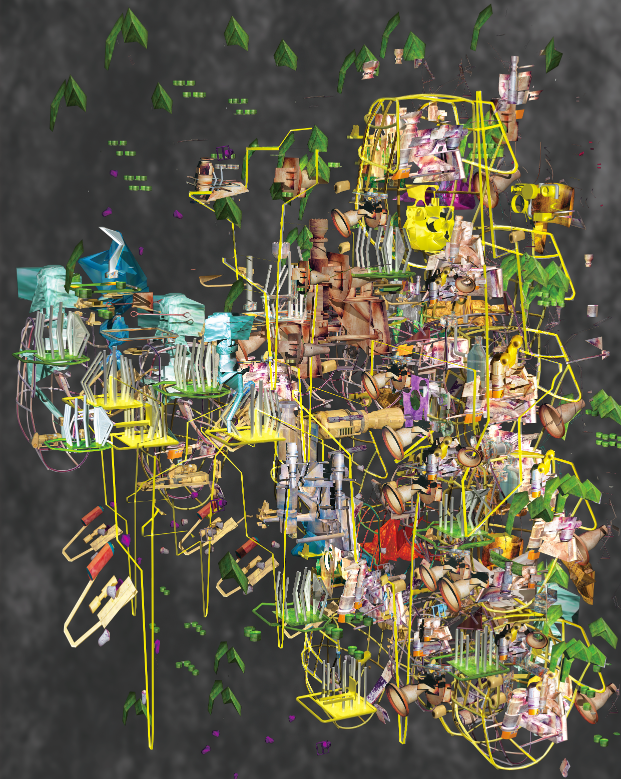 Therefore, the surrounding environment acts as an external force to accelerate punctuated equilibrium, leading to a set of radical transformations and incremental changes in their genetics as proposed by Stephen Jay Gould. These semi-living urban aggregates are grown into a set of flexible, tessellated modules supported by an exoskeleton; these aggregates function as a circuitry network and could grow according to future needs—and form broad, interconnected urban subsystems. The tissue-engineered biodegradable material is conceived to emulate bone structural properties and is used for the outer shell layer of the aggregates: to follow D’arcy Thompson’s claim, in his masterwork, On Growth and Form, that every organic form is essentially the product of the diagram forces that act upon it over time. Their biomimicry−driven feature is conceived to be a resilient parameter of its morphology, and its tessellated design is evolved in accordance with the local ecological conditions. 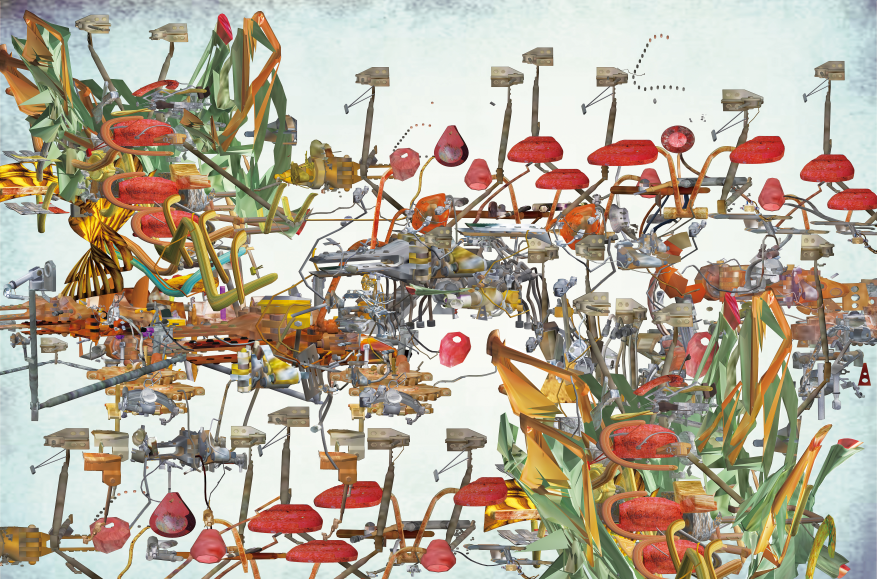 My blended background in architecture and visual art leads me to explore this hybrid approach, whereby I combine both traditional media and digital media. The drawing process involves base images that are composed by 3D modeling software, incorporating generative and recursive algorithms. Some of my works employ multi-agent morphological computation systems, including swarm intelligence, evolutionary optimization, and data transcoding algorithms as draft guidelines for finished work. These algorithms are widely used for optimization problems and machine learning, combining and expanding the range of possibilities in fusing design and biology. Such computational processes generate, evaluate and multiply design permutations based on intrinsic environmental behaviors and evolutionary processes that are immanent in nature. 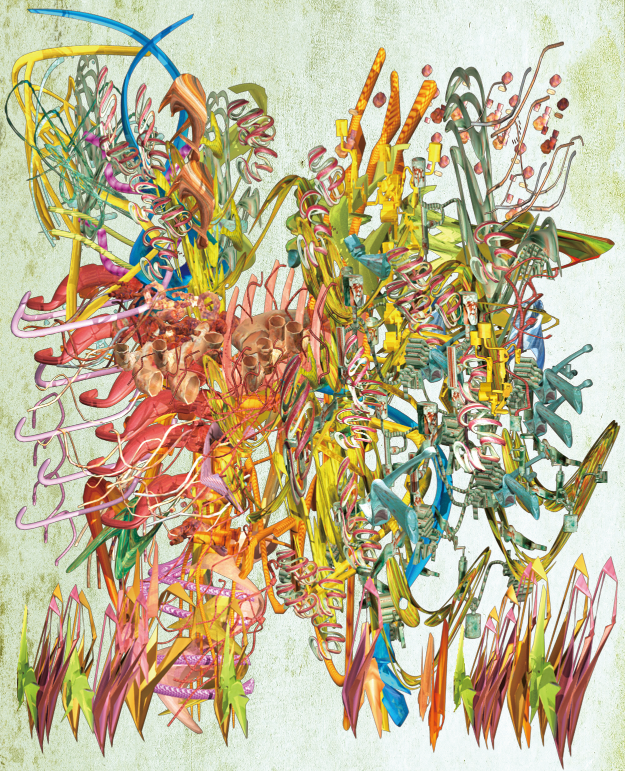 Following the initial phase described above, these draft drawings are merged with traditional media such as acrylic, ink, graphite, and photo collages. These are further processed and looped through a series of arithmetic operations, and feedback-loops, by the application of custom image editing programs in order to generate further possible combinations and permutations.

To reinterpret or paraphrase core ideas of Cedric Price’s theoretical tenets proposed in his Fun Palace, the visionary drawing of post-human urbanism is interpreted as a socially interactive machine, or as improvisational architecture, constantly revising itself in a ceaseless cycle of assembly and disassembly. Briefly, as famously proclaimed by Reimond Abraham during discussions of his work, the drawing is an accessible means to realize architectural ideas. The individual drawings are perceived as modular units, which could eventually be assembled as the cohesive and unified scenarios of meta-hybrid urbanism. 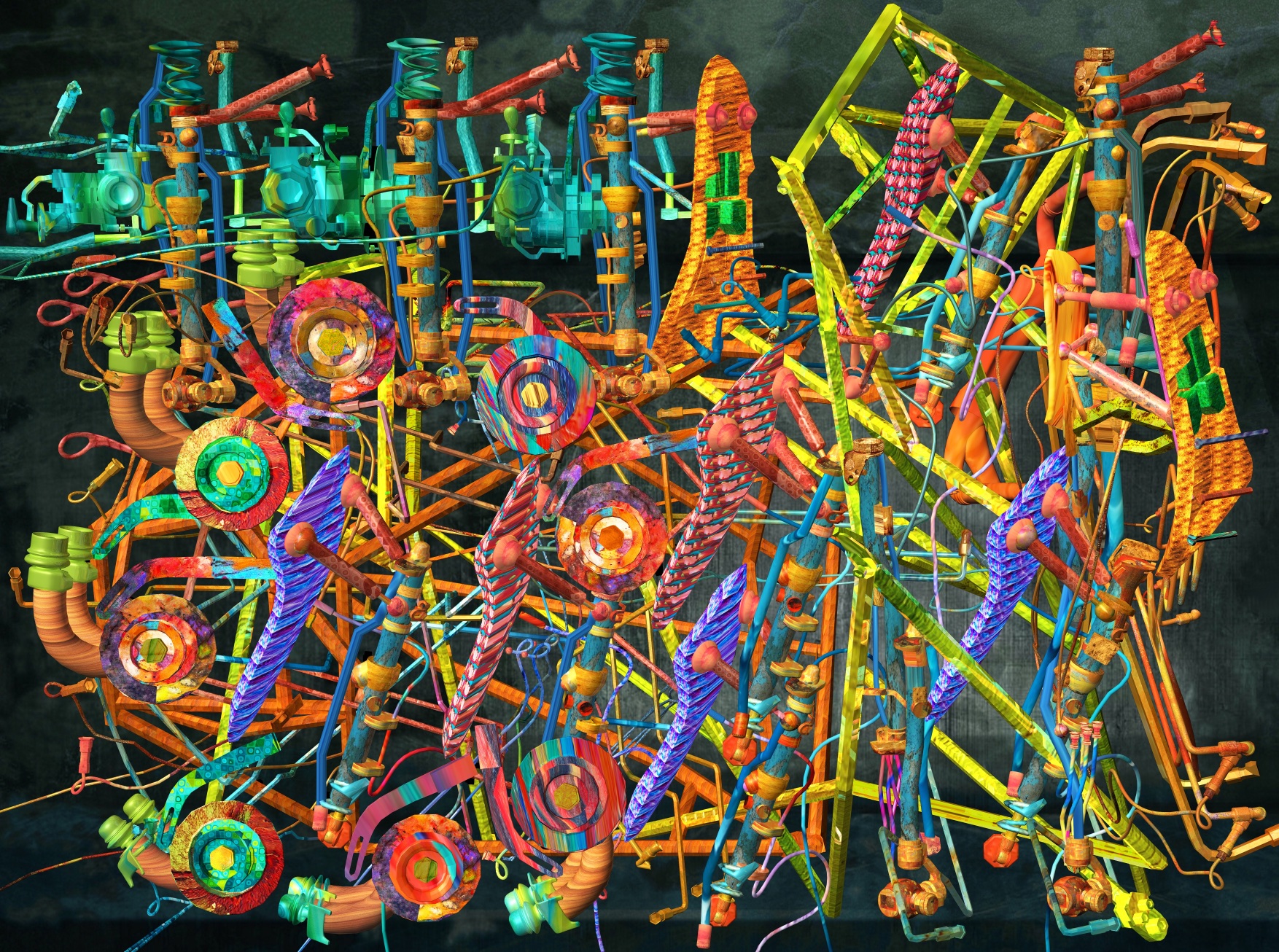 The varying scale, juxtaposition of biomorphic forms, intertwined textures, oblique projections and visual metamorphoses are employed as the multi-layered drawing methodologies to question and investigate the ubiquitous nature of urban meta-morphology, as well as the eco-political reality of the current geological epoch and visual representation in the context of non-Euclidean configuration. The hybrid media could be defined as “the collective recognition of a multiplicity of epistemological and methodological viewpoints in all cognitive dimensions of spatiality.” 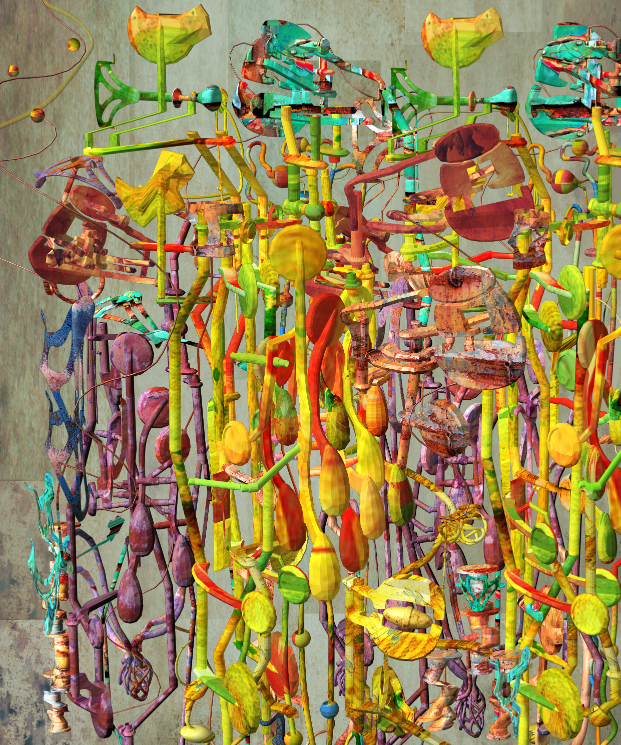 Furthermore, the application of the hybrid technique allows the work to transcend the boundaries between analog and digital media, as well as between two- and multi-dimensional domains. More broadly, the hybrid media involves a drawing process with shifting and, sometimes, unexpected organic effects that act as a catalyst to facilitate the dynamic interplay of variables among otherwise separate and fixed forms or formalistic rigidity associated with digital drafting platforms. Consequently, the drawing process accommodates and replicates the logic and form of nature that fits with the dynamic and far-from-equilibrium states of the world in which we now inhabit as its sentient beings. 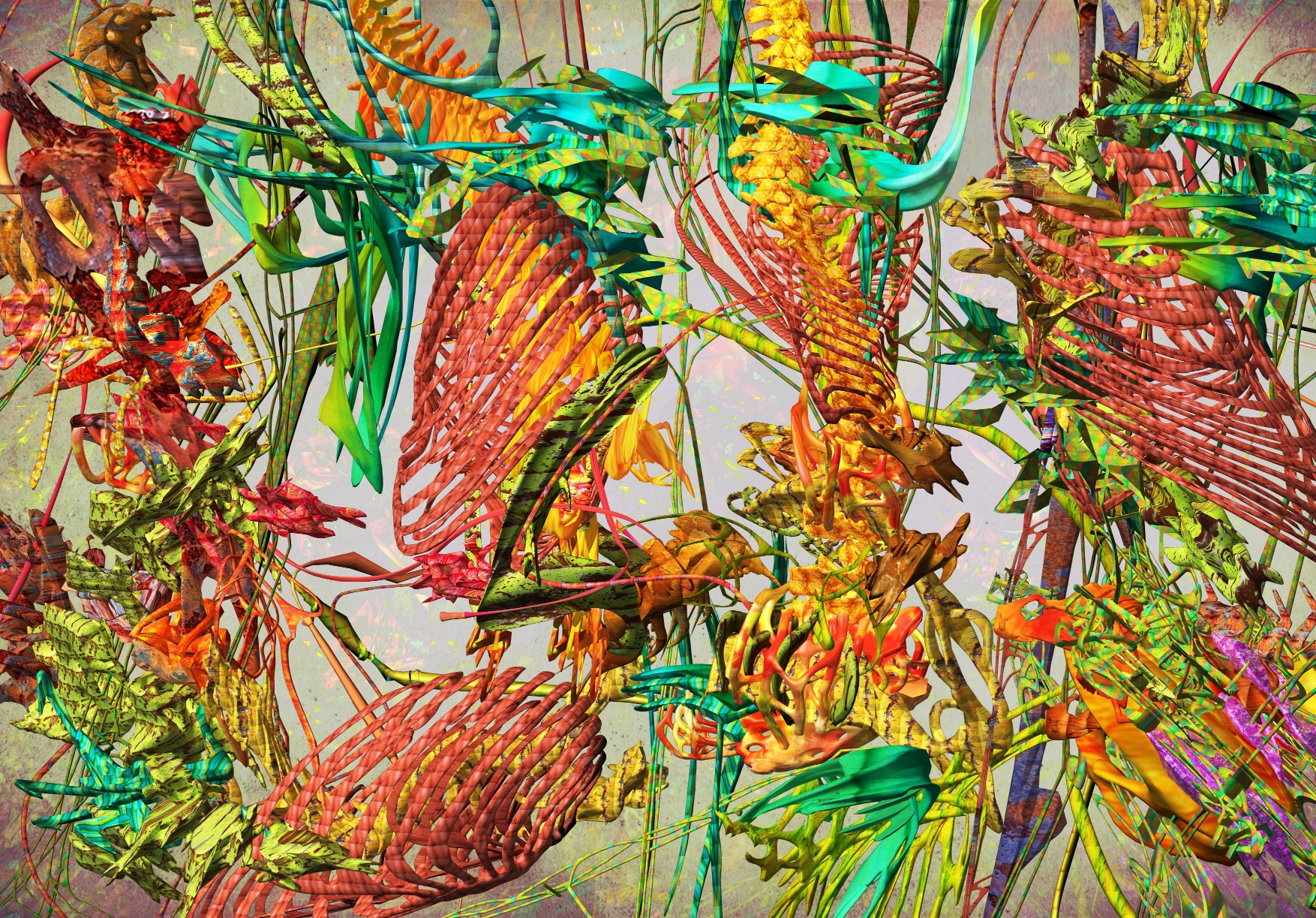 This compositional technique imbues the work with what we see as the very essence of our socio-cultural environments beyond the conventional protocols of architectural and artistic formalities. It conjures up the synthetic possibilities within which the spatial and temporal variations of existing spatial semiotics emerge as the potential products of alchemical procedures. ≈ç ≈ç

See part 1 and part 3 of this series.

RYOTA MATSUMOTO is a principal and founder of an interdisciplinary design office, Ryota Matsumoto Studio, and an artist, designer and urban planner. Born in Tokyo, he was raised in Hong Kong and Japan. After studies at Architectural Association in London and Mackintosh School of Architecture, Glasgow School of Art in early 90’s, he received a Master of Architecture degree from University of Pennsylvania in 2007. Before establishing his office, Matsumoto collaborated with a cofounder of the Metabolist Movement, Kisho Kurokawa, and with Arata Isozaki, Cesar Pelli, the MIT Media Lab and Nihon Sekkei Inc. He is currently an adjunct lecturer at the Transart Institute, University of Plymouth.