What the World Doesn't Know About Canada

Category
Anthropology & Social Sciences
Movements & Communities
Politics & Power
What the World Doesn't Know About Canada
by Grace Shepherd , Brad Harley
Published: Nov 17, 2015
Standfirst
Not so long ago, Canadians used to be regarded as nice, decent and, if you dared, perhaps even huggable. A nation of mensches, we thought. Well, that was then. A recent national election has inspired the author to weigh in on today's Canada. Drawings by Brad Harley.
Body

TORONTO — Canadians are a strange people. They like to think of themselves in ways that bear little relationship to reality. This became very clear in the recent election campaign, where the country’s five main parties squared off against each other.

Canadians believe that they are a kinder, more egalitarian, less violent and more sophisticated version of the United States. They see themselves as public spirited, with a great health care system, an excellent environmental record and a strong tradition of support for cultural excellence. They believe themselves to be an important middle power internationally, fighting just wars, leading UN peace keeping operations and helping alleviate hunger and poverty throughout the world.

Unfortunately, none of these things are true.

Canada’s favorite sport, hockey, is a form of on-ice carnage. Its public health system is one of the worst in the industrialized world; its environmental record is lamentable; and its support for culture is very limited. Internationally, it has not contributed significantly to peace keeping in decades; its military is rusting out; and its contribution to foreign aid has been shrinking for years.

These problems have been true for a long time. The previous Liberal government of Jean Chretien ignored international environmental treaties, cut foreign aid and support to the CBC, dumped the health care problem into the lap of the provinces and refused to finance the military properly. The Conservative government of Stephen Harper continued the tradition, but with even more gusto.

The Conservatives, acting in a spirit of bi-partisan impartiality, governed accordingly. They ignored the problems of the health care system, gave tax breaks to the rich, refused to do anything about the environment, sneered at peace keeping, chopped the military, foreign aid and cultural budgets and trumpeted their policies in a belligerent take-no-prisoners style.

The Conservatives assumed that since there was a broad consensus  on these matters between themselves and the Liberals, they must be the policies that Canadians wanted. In this, they were probably right.

But they forgot one thing.

This is where the Liberals got it right. They ran a brilliant campaign, flattering Canadians’ amour propre. They emphasized “sunny ways”, eschewed negative advertising and pandered endlessly to Canadians sense of themselves as good people. They even tailored their platform to Canadians’ favorite myths. They promised environmental reform, reduced inequality, more money for culture and a return to Canada’s role as a helpful fixer internationally.

We would never behave badly, polluting everything in sight, being mean to the poor and the ill, punching each other in the nose. No. Not us.

The Conservatives seem to be coming slowly around to the simplest truth of Canadian politics . . .

The Canadian public lapped it up. “Yes” they said collectively. “That is who we are, that is who we really are. Kind people. Responsible people. Fair people. We would never behave badly, polluting everything in sight, being mean to the poor and the ill, punching each other in the nose. No. Not us.”

The size of the Liberal triumph was very telling. They went from being the third party in the House of Commons, not even the Official Opposition, to a majority government. This has never happened before in Canadian history.

For their part, the Conservatives have been shattered by the size of their defeat. They have emerged in national media, looking like victims of a natural disaster struggling to explain what happened. Considerable finger pointing has begun and the beginnings of an attempt to purge the old order.

So far, the Conservatives account of what went wrong is most interesting for what it is not about. They have not said that they were defeated because of their pathetic record on the environment, their failure to fix the health care system or their endless provision of tax breaks to the rich. Instead, they have talked about the “tone” of the campaign. They have allowed that they might have been too negative and too belligerent, that they were not kind and warm enough.

The Conservatives seem to be coming slowly around to the simplest truth of Canadian politics: always tell Canadians how lovely they are regardless of what they really want or how they really behave. Learning this lesson will lay the basis for their recovery as a party.

The Liberals, for their part, are in an excellent position to carry on the same old policies that Canadians love so dearly: the traditional shirking of responsibilities, the refusal to bear our fair burden internationally and the failure to lift a finger to help the less fortunate. The trick will be not to forget that they must never call a spade a spade; they must never describe their policies accurately and they must never, ever, suggest that Canadians are not the most honorable people in the world. 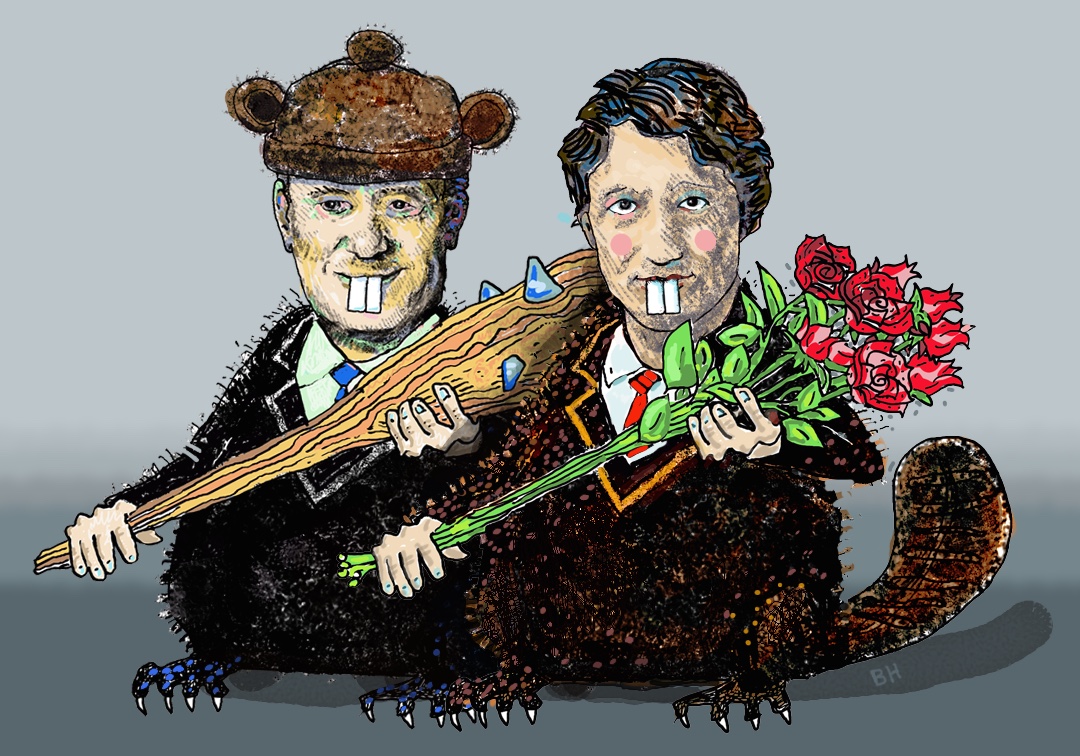 GRACE SHEPHERD is a writer, researcher, entrepreneur and business consultant in Toronto, plus a long time supporter and counsellor to the editors of The Journal of Wild Culture.

BRAD HARLEY is a cartoonist and the co-Artistic Director of Shadowland Theatre where he designs and makes theatrical costumes and props as well as produces environmental theatre events. He lives in Toronto.

What the World Doesn't Know About Canada
The Trudeau Restoration
Litmus Test for Closing the Canadian Mind
Rules for Revolutionaries: How Big Organizing Can Change Everything
Mayors, Be Our Agents for a Deal

The Trudeau Restoration
Rules for Revolutionaries: How Big Organizing Can Change Everything
Litmus Test for Closing the Canadian Mind
Mayors, Be Our Agents for a Deal
Isaiah Berlin on 'The Greatest Leader of Democracy in the 20th Century'