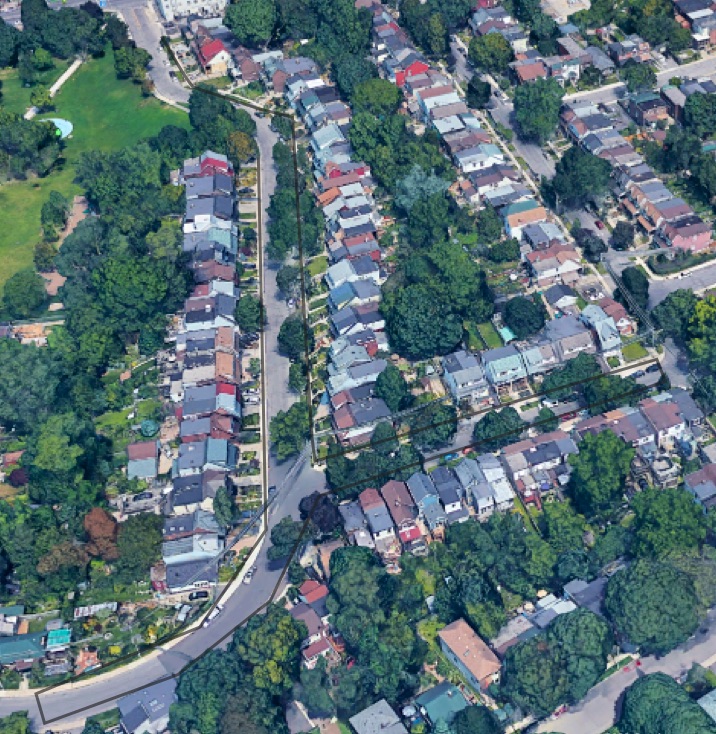 In the first week of March I started consuming a lot more news online. Maybe this is showing my biases, but it seemed to be one thing when it was in China; they were taking all these measures and by all appearances they had it somewhat under control. But when it hit Italy, it hit so much harder than in China, this made me very anxious. There was also the stock market crash and all of the potential unemployment that was going to happen. I wasn’t sleeping and couldn't focus on anything. When classes were cancelled and my engineering school shut down — and I knew from the news that things were going to get pretty bad — I packed up all my stuff and came back to the city to stay with my family. My thought at the time was, I’d rather weather the storm at home.

I left school three days after the NBA had cancelled their season and as soon as I got home I realized I had nowhere to put my nervous energy.

We saw them outside when we were giving out the notes and they just seemed a little bit shellshocked.

For the last six months I had been doing a lot of electoral organizing, canvassing and putting out flyers, as a member of a climate action group in Toronto. During this time I’d been following socialist organizers online, and other people of strain of ideology, and as the outbreak was getting worse and people were starting to shut things down, I noticed a post by a person who I follow on Twitter, a non-binary Korean organizer, a socialist of some kind from the Bay Area. They were posting about sending a message to their neighbours, a handwritten note: here’s our phone number, can you tell us any needs you have, what you might provide to others in need — and can you give us your contact information? They called it a mutual aid network. So this seemed like a good organizing project to put my energy into.

Before I did anything I checked with a couple of neighbours who have been here longer — they organize the summer street party and know a lot of the people — to get their advice as a gauge on how this idea might go down. They liked it and were supportive.

A couple of days later, on Sunday the 15th, I printed out the 120 forms. At that point, we were pretty certain we didn't have symptoms, but I made sure that I washed my hands thoroughly before handling the notes after they were printed. I mean, they came from the middle of the sheaf of printer paper, so I figured that was fairly safe. I signed all the notes from us, after having washed my hands and the pen I used, and put them in an envelope. Before we went out and put them at everyone's door, up and down the street and down the little side street, we washed our hands again and made sure not to touch our face when we were out there. On the notes we included the option that you could either email me your information or put the note back in our mailbox, which has a sign on it. 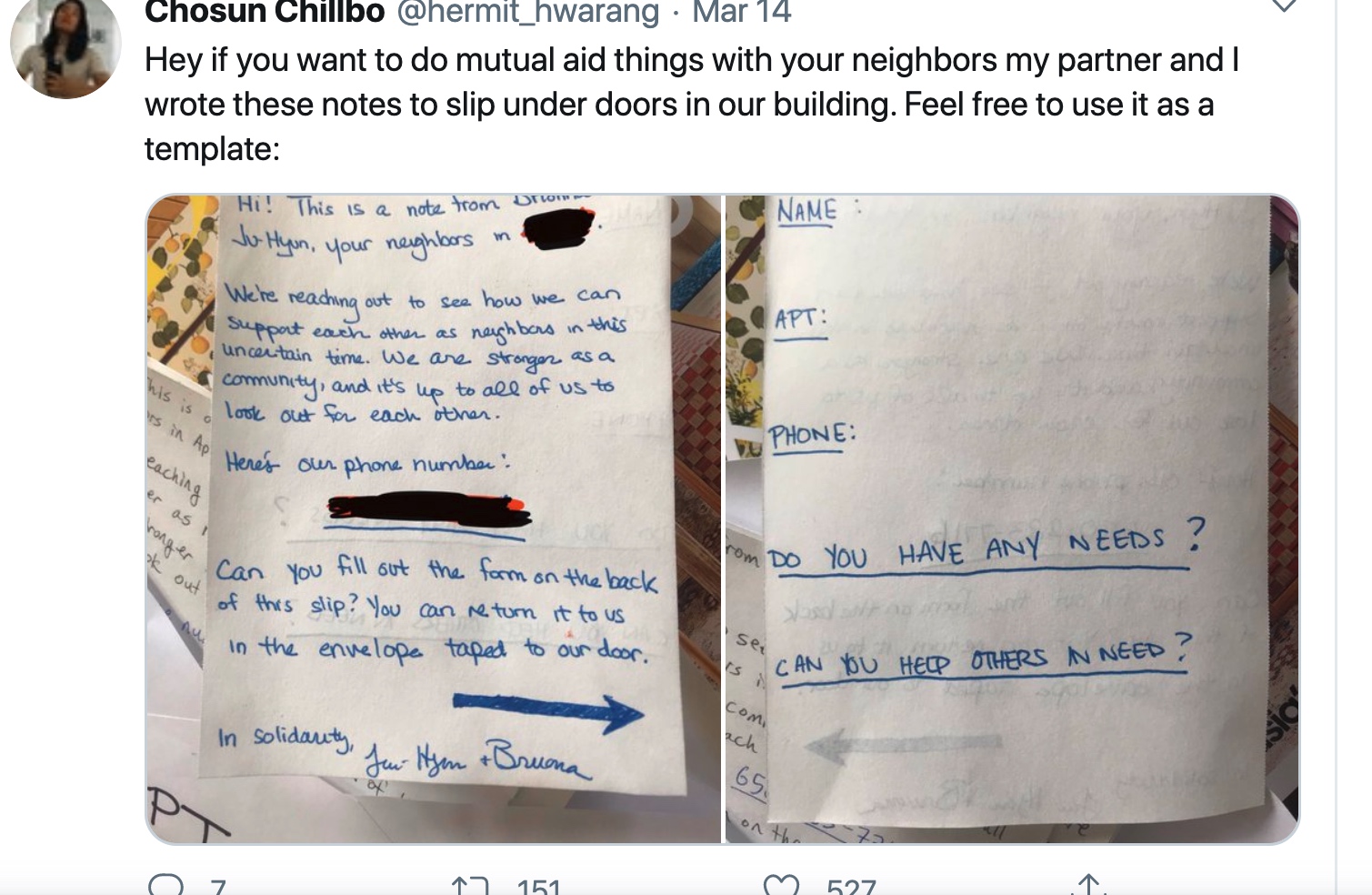 A message from across the continent inspired some action.

Two days later we received a few responses from the 105 delivered, and as of March 29th we’ve received 45 responses in the mailbox or by email. One guy just called me to say he's afraid of his computer, doesn't like using it because he doesn't know how to use it. But he has a truck and he can go get things if we need that. Pretty sweet, actually. We learned there’s a family of four that are living at home who say they're locked down but they can get groceries for other people. Some neighbours also offered childcare, sharing books and board games, cooking meals for each other, lending a car. A priest offered to give counselling sessions. An elderly couple living on their own said they don't want to leave the house. One of our neighbours offered gardening lessons — although I’m not sure how that'll work with social distancing! Though if it goes on, we could set up war gardens and have fresh produce over the summer, like they had in England during World War II.

A family with a baby at the bottom of the street seem pretty shaken up. We saw them outside when we were giving out the notes and they just seemed a little bit shellshocked; at that point everyone was staying home but no one really knew what was happening. It was all sort of, everything was out of place, all these families are spending all the time together.

My hope is that we become more tightly knit as we're forced to rely on one another.

One couple wrote: “Many thanks for your community initiative. As two OLD GEEZERS (ages 82 & 77), your initiative gives us a remarkable sense of support within our immediate community. It's so interesting as one walks the local streets. I often think of how little interaction there is, other than with immediate neighbours. As a one year-old when World War Two started, I have no recollection of collective responses at that time, however COVID-19 provides an eye-opening experience to young and old. Despite the damage this virus is causing, hopefully in the long run it will serve as an important contribution to empathy, compassion and community spirit with the many, developing outreach initiatives such as yours. Again, many thanks.”

To encourage the neighbours to connect and start using the network, I put the needs, offerings and contact information into a Google Sheets document. I told them to take a look through and reach out to someone if they needed to. One family, who gave a pretty standard response saying they didn't need anything and could run errands for others, have since contracted the virus, presumably from travel — a mother and father and two girls. We heard they have friends looking after them.

Who are my neighbours? The grey line denotes homes that received participation forms. The author's home is close to the intersection.

As I said, I was feeling very anxious in the days when I first got here, so connecting with the network gave me a bit of a sense of security, and I hope it’s also done that for some neighbours as well. My hope is that we become more tightly knit as we're forced to rely on one another. My sense is that most people on the street only know a few other people, but now that we're all staying home, it would be nice to form more of a community.

Being able to see things change as a result of your actions, your words, your decisions, this is a source of hope. It means that whatever state things are in — I can't control the broad direction of the world, I'm just one person — I can exert a small measure of control and power. Doing something together, rather than sitting somewhere alone, has been a source of hope and purpose for me. ≈ç

GORDON WINCH is a mechatronics engineering student at the University of Waterloo and an organizer with Climate Justice Toronto. His personal focus is on "the ongoing battle against the colonial, capitalist, and white supremacist structures at the root of the climate crisis, and the ways in which confronting these structures can enable us to build a more just and humane society while saving the world from ecological collapse." He lives in Toronto.

A Young Care Monger Spreads Mutual Aid
Easy in Huehuecoyotl: What is an EcoVillage and Why Should I Care?
Rational Rashers
Re:THINK Festival coming soon!
A Revolutionary Moment: Morsels of Insight from Chris Hedges' Wages of Rebellion

Rational Rashers
Re:THINK Festival coming soon!
A Revolutionary Moment: Morsels of Insight from Chris Hedges' Wages of Rebellion
Mayors, Be Our Agents for a Deal
Here's Lookin' At You, Kid: Bringing Art Inside