Home Supermarkets: Fishing in your Garage

Category
Agriculture
Ecologies
Research
Home Supermarkets: Fishing in your Garage
by Rosie Jackson
Published: Nov 11, 2017
Standfirst
New advances in DIY aquaponics make it easier than ever to grow plants and farm fish in your own backyard.
Body

Recent controversy surrounding over-fishing and large scale fish farming has spawned a string of new projects pioneering sustainable, local alternatives. Central to these new fishing methods is aquaponic production: an amalgamation of hydroponics – the growth of plants in water – and the cultivation of aquatic species.

Growing fish in tanks produces large quantities of ammonia-heavy waste. This is toxic for the fish but provides essential nutrients for plants. In nature, these species compliment each other in a healthy ecosystem. Aquaponic systems mimic this interaction, feeding the fish effluents to plant cultures for filtering, before recirculating the cleansed water back to the fish.

Any water overflow can be reused to boost growth of nearby soil crops, spawn or fry are added to the system to replace grown fish, and seedlings are grown alongside mature plants to stabilise nutrient content. Crops and fish can be harvested where they are needed, even when water or farmable land is scarce, in urban environments, rooftops, garages, and disused buildings.

In Hunts Point in the South Bronx, ex-banker Christopher Toole farms dozens of African Tilapia fish in 50-gallon rubbish and recycling containers. Relatively easy to grow, Tilapia survive on a vegetarian diet that keeps food costs down. The farm began with 500 tiny tilapia fry and a few mint and basil plants in Toole’s 14th floor apartment, before moving to a converted parking garage.

In a £3,000 aquaponic pilot scheme at The Bristol Fish Project in Bedminster, Bristol, local volunteers have been road-testing a “closed ecosystem” tilapia farm since May this year. Inside a polytunnel, two 1,000 litre fish tanks hold 80 fish beneath raised plant beds. In exchange for monitoring nitrogen and ammonia levels, volunteers receive cost-price fish and vegetables. 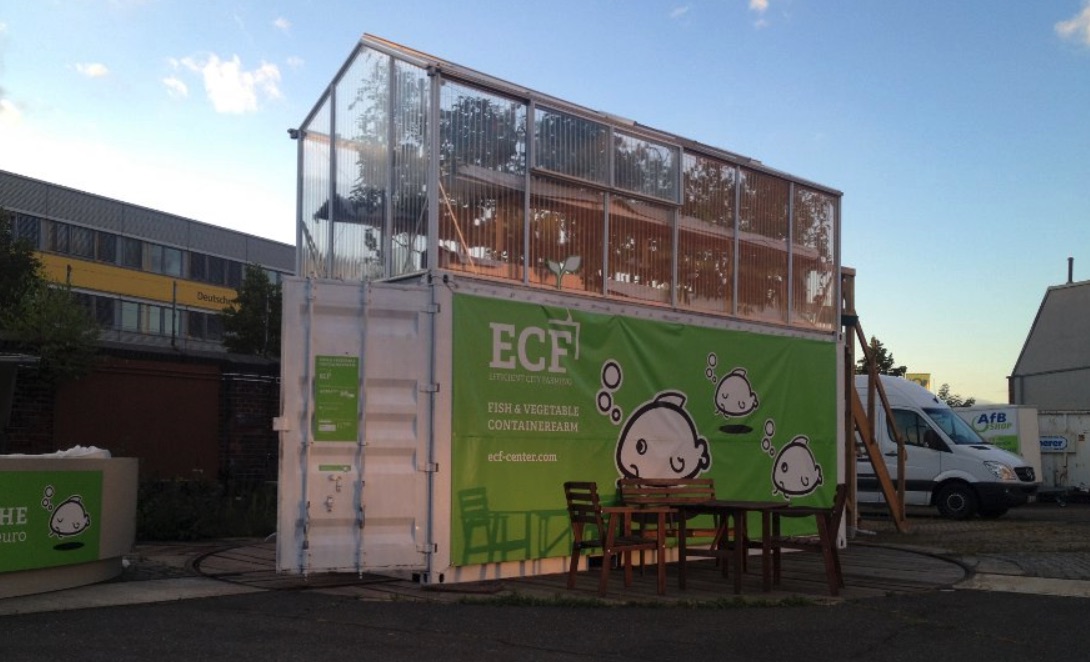 Berlin is currently host to several aquaponics projects, including a 7,000 square metre Schöneberg plot built by Efficient City Farmers, the second largest rooftop farm in the world. Housed above a vast former malt factory, the stilt-mounted greenhouse container is a prototype for alternative farm systems in German cities. The greenhouse warmth simultaneously boosts growth of tomato plants and keeps the perch comfortable below. Each €35,000 container holds 200 litres of water and can produce one kilo of fish, far below the average 1,000 litres used in factory fish farms.

Wadi Natrun fish farm in the Sahara desert runs off a reserve of saltwater, 120 kilometres south of the Mediterranean coast and supplies Egypt with large quantities of Sea Bass. Water temperatures are high at 19-27° Celsius, with fish growing more rapidly than in European waters. A drip irrigation system channels excess salt water to rows of desert plants to complete the closed system.

This article first appeared in the Journal of Wild Culture on December 10, 2012.

ROSIE JACKSON is a UK-based writer, journalist and former Associate Editor of the Journal of Wild Culture.