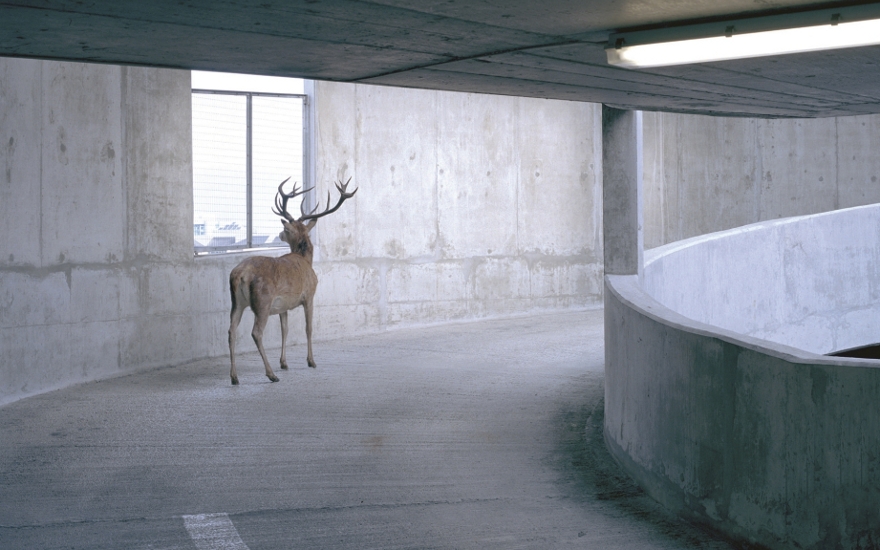 They heard us coming long before I saw them, and the woods were now filled with strange sounds: yelping, roaring, whickering and a noise so deep that I heard it not only with my ears but also with my chest: a sustained, resonant drone, like the lowest note of a church organ. As we came within sight of the enclosure, the sounds intensified. The animals clustered around the gate. Thick-thighed, with small pert ankles and hooves, they looked like fat ladies in high heels. The rectangular blocky bodies were covered in dense bristles; their winter coats were almost blond. The delicate snouts were so long that they looked like little trunks. As the smell of the bucket reached her nostrils, the dominant female, crested and humped, a deep-bodied battering ram, barged the other beasts out of the way.

When the pellets were scattered on the ground, the boar purred and growled, occasionally exploding into shrieks and squeals as the big sow drove the others off the food. They ploughed up the soft soil, using not their little bleary eyes to find the food, but the sharper organs in their snouts. Close to the fence the earth was churned and gouged; throughout the twelve hectares of the enclosure there were ruffles and furrows in the ground. This was why the boar had been brought here: to grub out the rhizomes of the bracken, which prevent tree seedlings from reaching the light, and to disturb the soil so that seeds could germinate. Though the remaining trees, now ancient, rained seed upon the ground here, none survived, because the bracken, released by heavy grazing from competition, had swarmed the bared land beneath them, creating an impenetrable barrier.

I would struggle to describe these boar as wild: the Dangerous Wild Animals Act forces their owners to act as zookeepers. The boar, like the beavers I saw in Wales, live behind high fences and electric charges. But elsewhere in Britain, they are starting to re-establish themselves, without permission from the authorities. The first major escape from boar farms here took place during the great gales of 1987, when trees crashed down on the fences. Since then they have continued to escape from farms and collections, and they have now founded at least four small colonies in southern England and possibly a fifth in western Scotland. They breed quickly. The government says that unless determined efforts are made to exterminate them, they will become established through much of England within 20 or 30 years1. It is a prospect that delights me, though I accept that not everyone shares this view.

The boar's reputation for ferocity has been greatly exaggerated.

Their reputation for ferocity has, like that of many large wild animals, been greatly exaggerated. It is true that they will attack dogs that chase them or people who corner them, but researchers who investigated this question concluded that, though they live throughout continental Europe, “we have been unable to find any confirmed reports in the literature of wild boar making unprovoked attacks on humans.”2 The government believes that the chances that they could transmit exotic diseases such as swine fever or foot and mouth to livestock are low, but they will cause damage to crops. This, it says “is likely to be small in comparison to agricultural damage from more common wildlife such as rabbits”3. They can also break into pig pens, kill the domestic boars and impregnate the sows.

On the other hand, the boar will catalyse some of the dynamic processes missing from our ecosystem. They are another keystone species, shaking up the places in which they live. The British woodland floor is peculiar in that it is often dominated by a single species, such as dog’s mercury, wild garlic, bluebells, bracken, hart’s tongue,  male fern or brambles. These monocultures, like fields of wheat or rapeseed, may in some cases be the result of human intervention, such as the extirpation of the boar. To visit the Białowieża forest in eastern Poland, which is as close to being an undisturbed ecosystem as any remaining in Europe, in May, when dozens of flower species jostle in an explosion of colour, is to see how much Britain is missing, and the extent to which the boar transforms its environment.

I understand people’s concerns about the loss of those uninterrupted carpets of bluebells that have made some British woods famous. They are, I agree, stunning, just as fields of lavender or flax are stunning, but to me they are an indication not of the wealth of the ecosystem but of its poverty. One of the reasons why bluebells have been able to crowd out other species in the woods in which they grow is because the animal which previously kept them in check no longer roams there. Wild boar and bluebells live happily together, but perhaps not wild boar and only bluebells. By rooting and grubbing in the forest floor, by creating little ponds and miniature wetlands in their wallows, boar create habitats for a host of different plants and animals, a shifting mosaic of tiny ecological niches, opening and closing as the sounders pass through4. Boar are the untidiest animals to have lived in this country since the ice age. This should commend them to anyone with an interest in the natural world.