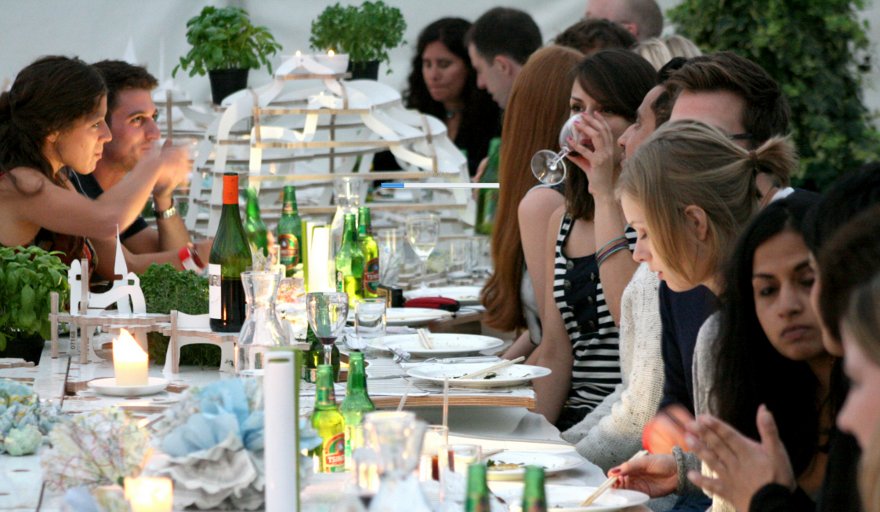 Global Feast, the brainchild of London curators, architects and restaurateurs, offers a microcosmic view of global cultures; exploring food, dance, music and art from the four corners of the globe. But no matter how far flung these snapshots might be, they are also an intrinsic part of London life, with artisans pulled from the city’s diverse multitude to showcase the global village it is now, and maybe always has been.

Mere metres from Stratford Town Hall, where the event is held around a stunning, Atmos Studios-designed table (carved into a topographically accurate world map), lies the Olympic village and stadium. On the night I attend, London’s moment on the world stage is being ushered to an end by, amongst other British luminaries, the Spice Girls – a group whose brand was so far-reaching in their heyday that there are stories of tribes in remote Andean regions who could recite their nicknames. Global Feast, on the other hand, focuses on the more indigenous traditions of western South America – with Peruvian dishes such as ceviche and lucuma fruit ice cream to supplement the scandalous gyrations of Argentinian tango.

In the same way that family and friends gather for a feast on Dia de Todos Santos (the South American ‘Day of the Dead’), food is, unsurprisingly, at the heart of Global Feast, the centre around which the evening turns. A mix of invited guests and visitors from various cultural enclaves of the city gather to share stories of assimilation. Guests are invited to put candles on their place of origin and note their journey to London on the latitudinal lines of the multi-layered table. We are regaled with anecdotes about Peruvian cuisine and the diet of the first Olympiads (via a quick detour to Greece…)

Meanwhile, artist Nadege Merieau, who has four new photographs at the event, realises this theme – of food structuring and shaping our environment – in a more abstract manner. At first glance, Meriau’s work recalls Ryan McGinley’s Moonmilk series, where spelunking caves are colour-washed to resemble set pieces from 'Vampyros Lesbos'. Meriau's worlds are a cross between the fetid, womb-like dens occupied by movie serial killers and something the Mars Curiosity rover might stumble across. And yet they’re compelling and familiar – inviting even. Perhaps this is because Meriau is one of a slew of contemporary artists echoing Arcimboldo by using vegetables as their medium. However, unlike, say, Klaus Pichler whose photographs of mouldy fruit question food wastage in our society, or Christopher Boffoli, whose whimsical food tableaux poke fun at our reliance on food, Meriau uses an architectural approach straight from biomimicry, an approach where a kingfisher’s beak can become the tip of a bullet train and a whale flipper becomes the blade of a wind turbine.

Meriau talks eloquently of the ‘nesting instinct’ apparent in her work. “The potato rhizome produces a constellation of roots and shoots as it feeds off the soil,” she says, “gradually creating a space for itself, much like the way we create a sense of belonging through making multiple connections within our community.” It's an idea of particular relevance here in Stratford City as the boom of the Olympics dwindles. The area features heavily in the London Plan and Newham Council’s regeneration scheme, with 32,000 new homes planned and £7.3 billion (now in excess of £12.5 billion) set aside for new builds including the Westfield Centre and the Olympic Park, which rise like the neon obelisks of Blade Runner against the council blocks of one of London’s most poverty-stricken areas.

One need only look at the upmarket brands in Westfield to tell that regeneration of this kind is not so much about Meriau's idea of organically rooted and connected communities; and more about superimposing a template of affluence and aspiration beyond the means of the existing communities of this deprived area. Even the instigation of initiatives such as long-term rental plans (as an alternative to home ownership) may not be enough to retain existing tenants. As such, arts initiatives like Global Feast and Stratford Circus both highlight and help to create the culture of the area – bolstering a sense of identity and pride in the community, and retaining strength of character amid the inevitability of modernity.