Category
Art & Aesthetics
Neuroscience
Research
The Hidden Neuroscience of Leonardo da Vinci
by Sophie Fessl
Published: Sep 30, 2019
Standfirst
“Leonardo was interested in understanding the totality of the universe," writes Jonathan Pevsner, a researcher into the artist's explorations in neuroscience. "It was natural for him to be interested in the brain as the seat of the soul and as a location of the senses.”
Body

Leonardo’s depiction of the cavities of the brain: top center image shows the brain cut in half through the midline and opened out; beneath shows the base of the brain. The two images on the sides describe the three-dimensional form of the ventricles, only a bit distorted by the pressure of the wax-injection method he used to preserve the spaces. [o]

Leonardo da Vinci didn’t just bequeath the world masterpieces like “Mona Lisa” and “The Last Supper.” The archetypal Renaissance Man was an accomplished engineer, musician, and entertainer. And neuroscientist: Leonardo did research and made detailed medical sketches, searching for the location of the soul and trying to understand the workings of the mind. 500 years after his death, it’s easy to see how the artist and engineer overtook his contemporaries in understanding the brain — though they could not see it at the time.

Leonardo’s studies of the brain fit with his quest to understand the world, says Jonathan Pevsner, a professor at the Kennedy Krieger Institute who has published several articles on Leonardo and his contributions to neuroscience. “Leonardo was interested in understanding the totality of the universe. It was natural for him to be interested in the brain as the seat of the soul and as a location of the senses.”

He was prioritizing his love of animals over his objective curiosity.

He may have had another motive, as well. “In the 15th century, painting was not considered one of the liberal arts,” Pevsner says. Leonardo made many arguments that painting should be elevated, that it’s superior to sculpture, poetry or music. He was thinking about the brain in part as an artist, as the black box that receives and processes information, since his job as a painter was to express what he perceives. He wanted to explore that black box and see what’s inside it.”

SEEING THE BRAIN AS AN ARTIST SEES IT

The earliest surviving anatomical drawings by Leonardo relate to this debate. Dating from circa 1487, they show what is thought to be his only experiment on living animals, in which he pierced the spinal column of a frog. On one sheet, next to a drawing of the base of the skull, Leonardo describes what he did,

. . . the frog retains life for some hours when deprived of its head and heart and all its bowels. And if you puncture the said nerve [spinal medulla] it immediately twitches and dies. All nerves of animals derive from here [spinal cord]. When this is pricked, the animal dies at once.

And on the other side of the sheet, Leonardo comments on his finding,

. . . the frog instantly dies when its spinal medulla is perforated. And previously it lived without head, without heart or any interior organs, or intestines or skin. Here, therefore, it appears, lies the foundation of movement and life.

This investigation into one of the most fundamental questions of life may have been the first rigorous study of the question, at least in Europe. He may have drawn inspiration from a Roman historian’s observation of how an elephant was quickly killed by a thrust of a blade into the neck. 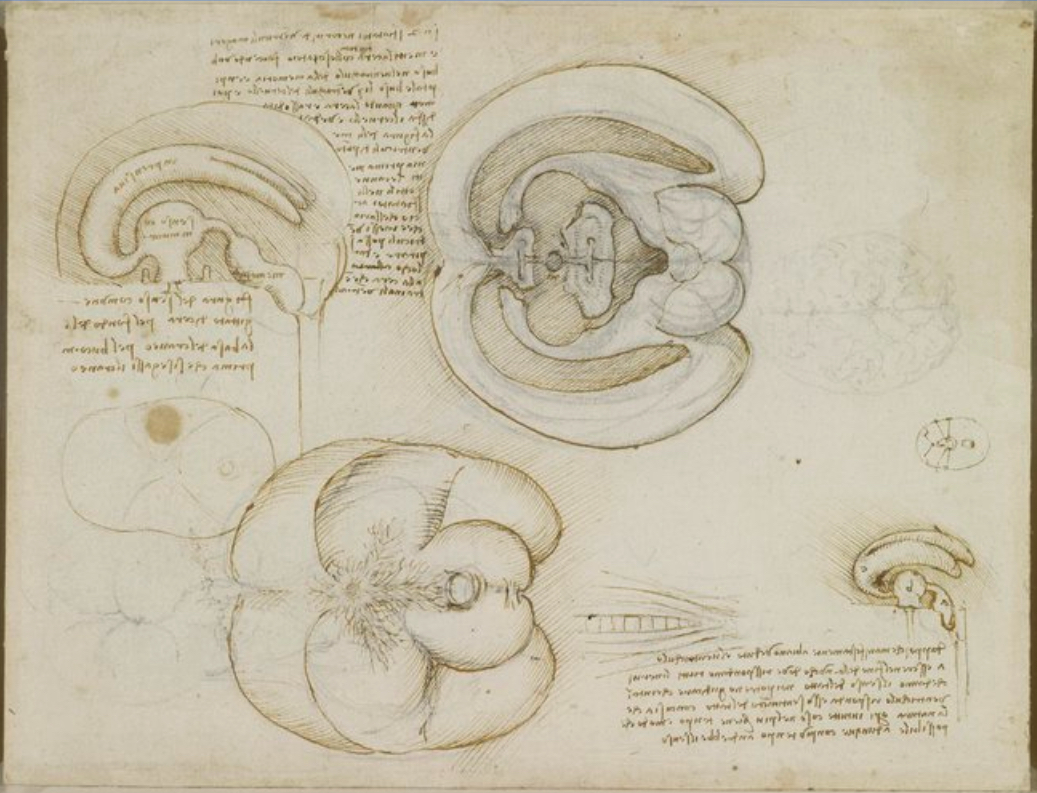 Leonardo’s depiction of the cavities of the brain: image shows the brain cut in half through the midline and opened out; beneath shows the base of the brain. The two images on the sides describe the three-dimensional form of the ventricles, only a bit distorted by the pressure of the wax-injection method he used to preserve the spaces. [o]

Leonardo never performed an experiment on living animals again, says Pevsner. “He loved animals so much that he became a vegetarian. He was famous for buying birds in the marketplace and setting them free. If Leonardo had allowed himself vivisection in other studies, he would have had a very good chance of identifying the circulation of the blood. I think he was prioritizing his love of animals over his objective curiosity.”

WHERE IN THE BRAIN IS COMMON SENSE?

Leonardo also turned his attention to investigating where the soul resides in the brain.  Around 1487, he drew three sketches showing the position of the senso comune, literally “common sense” or confluence of the senses, among the brain ventricles. The idea that the ventricles of the brain — the fluid-filled spaces — rather than brain matter are responsible for its major functions derived from ancient Greek thinking. The senso commune, along with fantasy and imagination, was thought to reside in the anterior ventricle (now called lateral ventricles), rational thinking in the middle ventricle (now third ventricle), and memory in the posterior ventricle (now fourth ventricle).

Leonardo, however, turned against the prevailing thought to reorder the standard concept. In one sketch, the optic nerves converge on the anterior ventricle, labelled imprensiva, while he labels the middle ventricle senso commune and the posterior ventricle memoria. Imprensiva was a name Leonardo coined, and wasn’t used by any anatomists before or after. It means the processing of sensory information, in particular from the eyes. He describes his idea of how information passes to and through the ventricles:

The senses are moved by the objects; and these objects send their images to the five senses by which they are transferred to the imprensiva, and from this to the senso comune. From thence, being judged, they are transmitted to memory, in which according to their power they are retained more or less distinctly. 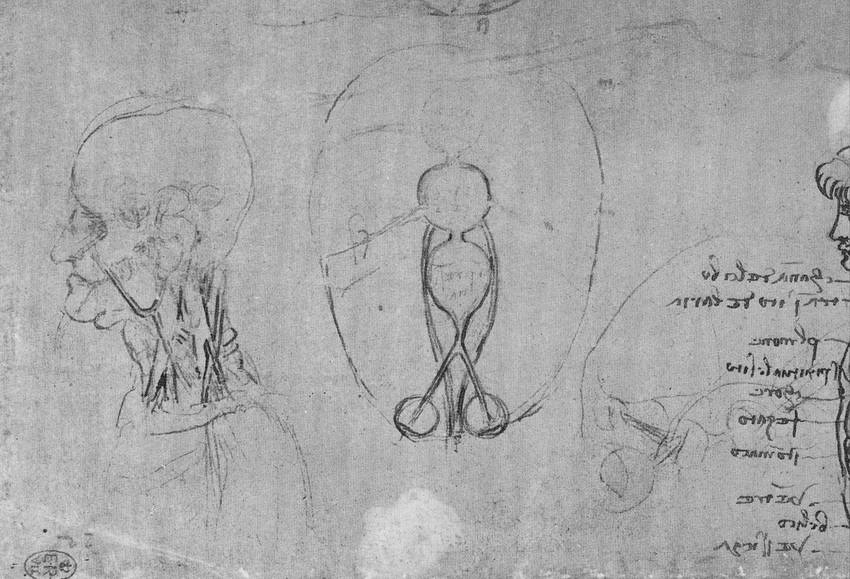 In this section of a larger set of drawings, Leonardo da Vinci offers 3 views on where he thought the “senso comune” ventricle (space where the soul resides) sat in the brain. Clearest view is the center image: The first circular space behind the eyes was imprensiva (senses), the second the senso comune, the third memoria (memory). [o]

This re-ordering was highly original, Pevsner says. “Leonardo dedicates one whole ventricle in the front to both vision and intellect, to understanding sensory input and processing. As a painter, he was trying to say: Nothing is more important than what I see. What I see is processed in the main ventricle to help interpret our world.”

Later in life, around 1508 and 1509, Leonardo returned to the topic of ventricles. Applying his skills as a sculptor, he invented a technique to model the ventricles’ shape: After drilling a hole in the base of the brain of a dead ox, he injected hot wax into the third ventricle with a syringe. When the wax was set, Leonardo dissected away the brain, leaving behind a cast of the ventricles. In a detailed drawing, Leonardo showed the accurate shape of the ox’ cerebral ventricles – and how to insert the syringe to achieve the complex cast.

ON THE ROAD TO MORE KNOWLEDGE

Experiments and dissections weren’t easy feats to accomplish in the 15th century. “Leonardo likely had to create his own dissection equipment. He also didn’t have fixative, so like other anatomists, he worked on a decaying corpse,” Pevsner says. “Leonardo describes how it is working in the middle of the night on corpses that are ‘flayed and horrible to see’.”

In addition to developing his own experimental techniques, he also had to come up with his own theories, conclusions that ran counter to contemporary ideas, Pevsner says. “It is very difficult to overcome the weight of authority. Giants of antiquity were stating concepts that were incorrect. For Leonardo to see beyond that was very difficult, and it’s difficult for anyone. Many frameworks for thinking about problems are fundamentally wrong, and we know it only when someone shows us a new paradigm. This happens constantly in science today, for example when the Archaea were shown to be a third branch of the Tree of Life.” 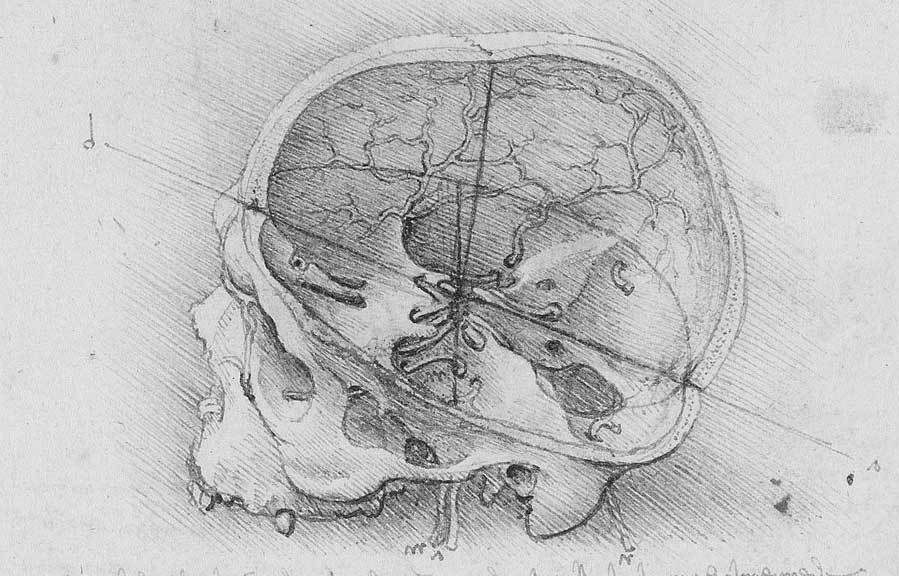 In a drawing of a skull viewed obliquely from above, Leonardo shows the intracranial nerves and vessels. [o]

FROM CRANIAL NERVES TO VISION

Leonardo also explored other aspects of the brain. Between 1487 and 1493, he drew life-like renditions of the human skull. In one of these drawings, we even see the maxillary antrum, a cavity in the face that Leonardo was the first-known artist to describe. Leonardo also achieved the first accurate drawing of the blood supply to the brain, the meningeal arteries.

In later life, after he made the cast of ventricles, Leonardo synthesized some of the information. He accurately drew the brain and cranial nerves, for the first time describing the olfactory nerves as cranial nerves and diagramming the crossing of nerves at the optic chiasm. Leonardo also drew the vagus nerve and the innervation of the hand of an old man shortly after his death.

Leonardo was also interested in light, vision, and the optics of the eye. Although he rejected the idea that an inverted image is projected onto the back of the eye, he did accept the conclusion that we see objects because the eye receives light, rather than because the eye emanates a visual power.

Despite all that Leonardo found and drew, his attempts to locate the seat of the soul and understand the brain did not influence the course of anatomy or medicine, Pevsner says. “Leonardo’s influence was very modest, because he did not publish his anatomical findings. Instead, his manuscripts were rediscovered and slowly published in the 19th and into the 20th century. So he was not a source of direct knowledge, but his legacy serves as an inspiration to people over the centuries.”

In fact, for Pevsner, Leonardo’s quest continues today. “I’m struck by how many of the questions are similar over the centuries. Our tools have become more sophisticated, but we still have so far to go. There is still room for the kind of clear thinking that Leonardo really advanced.” 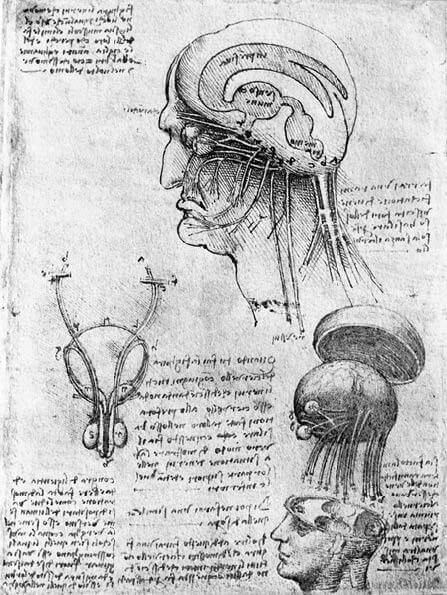 SOPHIE FESSL. Before she worked in science communication, Sophie pursued a PhD in Developmental Neurobiology at King’s College London and a BA in Biology at the University of Oxford. While writing up her thesis, she realized that she much preferred writing about science to actually doing it in the lab. Her articles have been published in a variety of magazines and online publications. She writes in German and English and lives in her hometown, Vienna.