Human Places We Know Way Down There 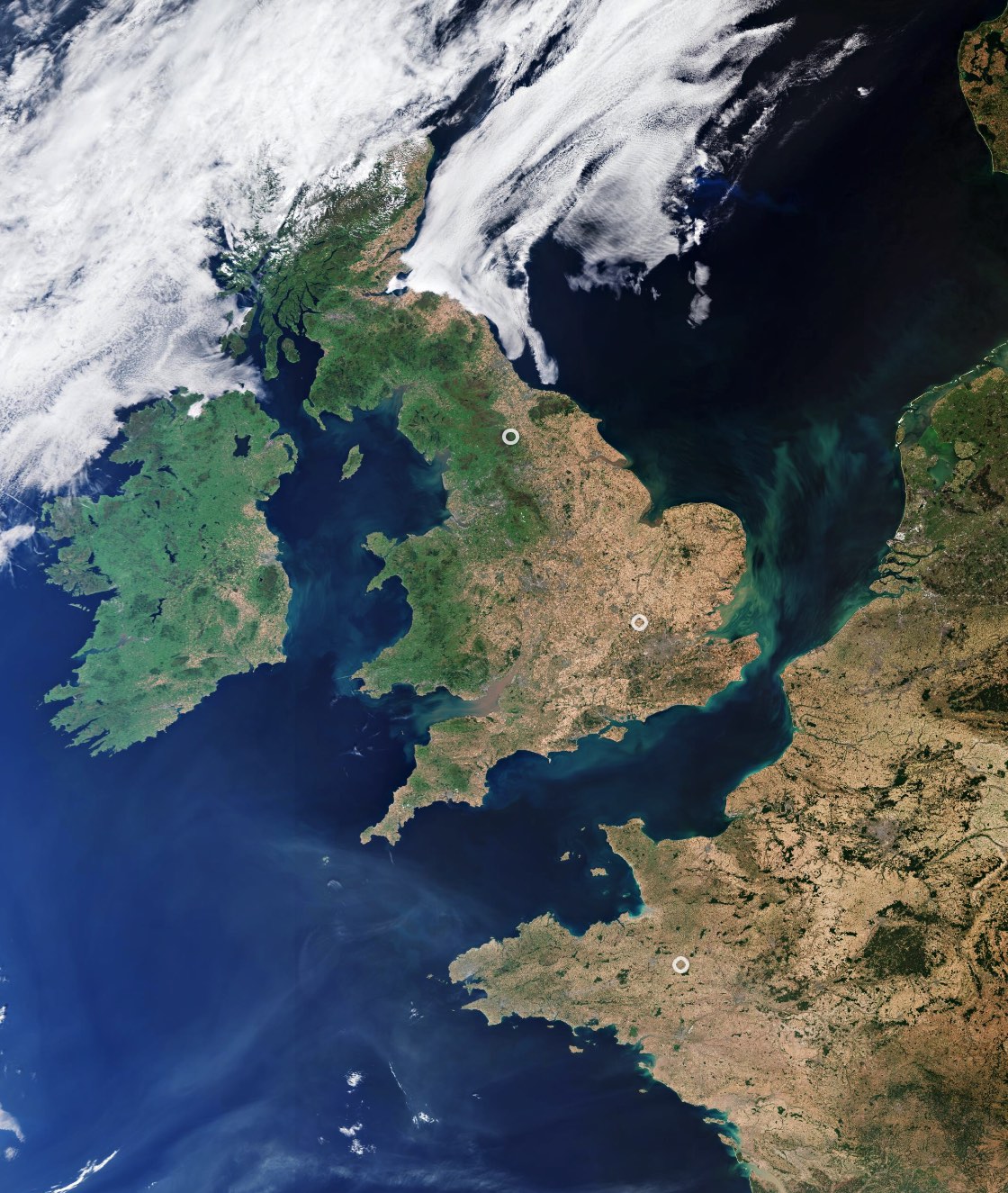 This summer, heatwaves struck Europe, North Africa, the US and Asia with temperatures reaching over 40°C in places – breaking many long-standing records.

The image, captured on 12 August 2022, shows the United Kingdom’s previously green land appear brown (particularly in the southeast) amid the scorching conditions. The heatwave comes after months of extreme temperatures and low rainfall left the landscape parched.

Satellites orbiting our planet play an important role in delivering data to understand and monitor how our world is changing. Their observations and data are critical for improving model predictions of our future climate, mitigation strategies and policymaking.

Monitoring land-surface temperatures is useful for scientists because the warmth rising from Earth’s surface influences weather and climate patterns. These measurements are particularly important for farmers evaluating how much water their crops need and for urban planners looking to improve heat-mitigating strategies. 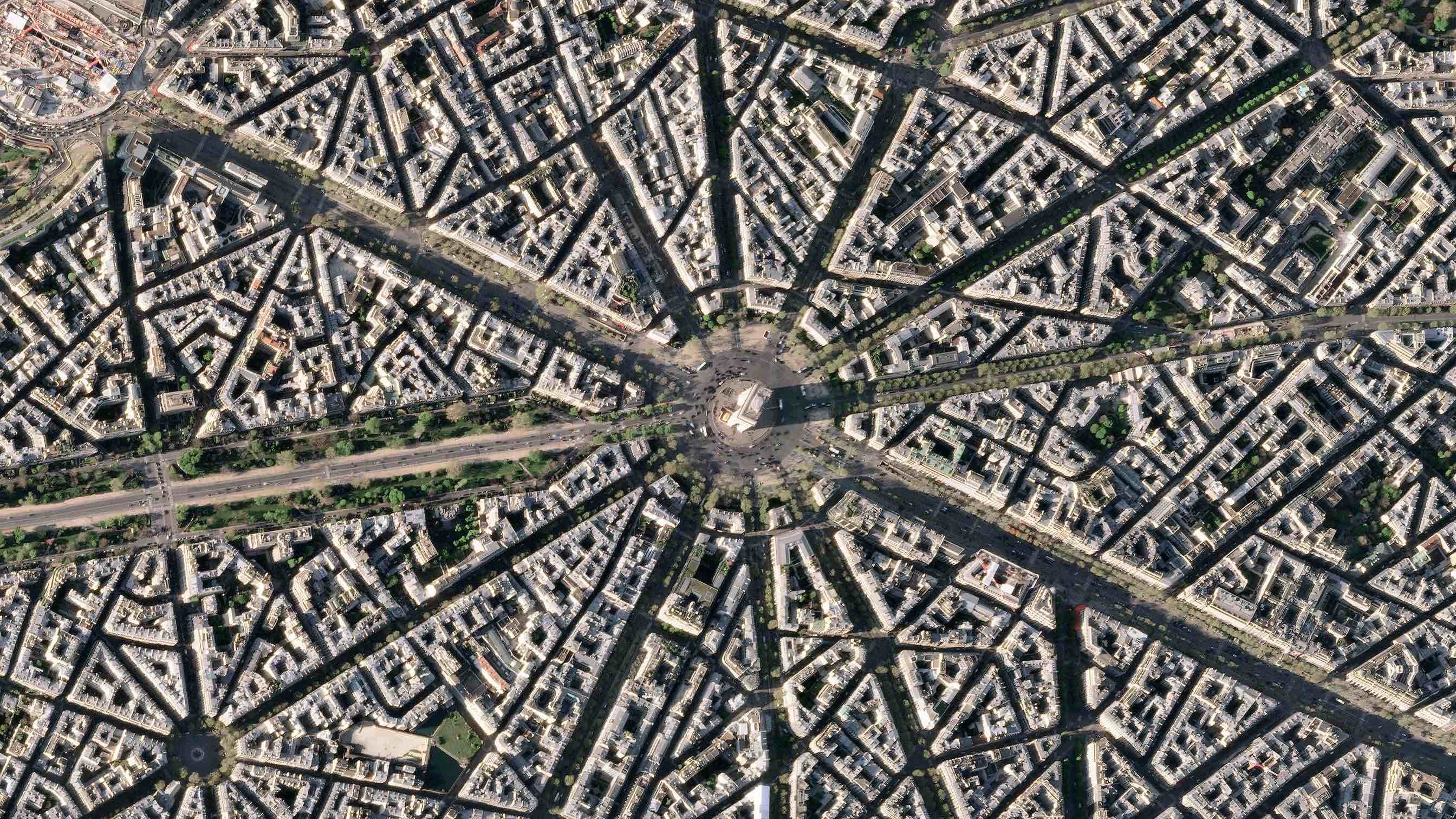 The Arc de Triomphe, or in full, Arc de Triomphe de l’Étoile, is an iconic symbol of France and one of the world’s best-known commemorative monuments. The triumphal arch was commissioned by Napoleon I in 1806 to celebrate the military achievements of the French armies.

The arch stands at the centre of the Place Charles de Gaulle, the meeting point of 12 grand avenues which form a star (or étoile), which is why it is also referred to as the Arch of Triumph of the Star. The arch is 50 m high and 45 m wide.

The names of all French victories and generals are inscribed on the arch’s inner and outer surfaces, while the Tomb of the Unknown Soldier from World War I lies beneath its vault. The tomb’s flame is rekindled every evening as a symbol of the enduring nature of the commemoration and respect shown to those who have fallen in the name of France.

The Arc de Triomphe’s location at the Place Charles de Gaulle places it at the heart of the capital and the western terminus of the Avenue des Champs-Élysées (visible in the bottom-right of the image). Often referred to as the ‘most beautiful avenue in the world’, the Champs-Élysées is known for its theatres, cafés and luxury shops, as the finish of the Tour de France cycling race, as well as for its annual Bastille Day military parade. 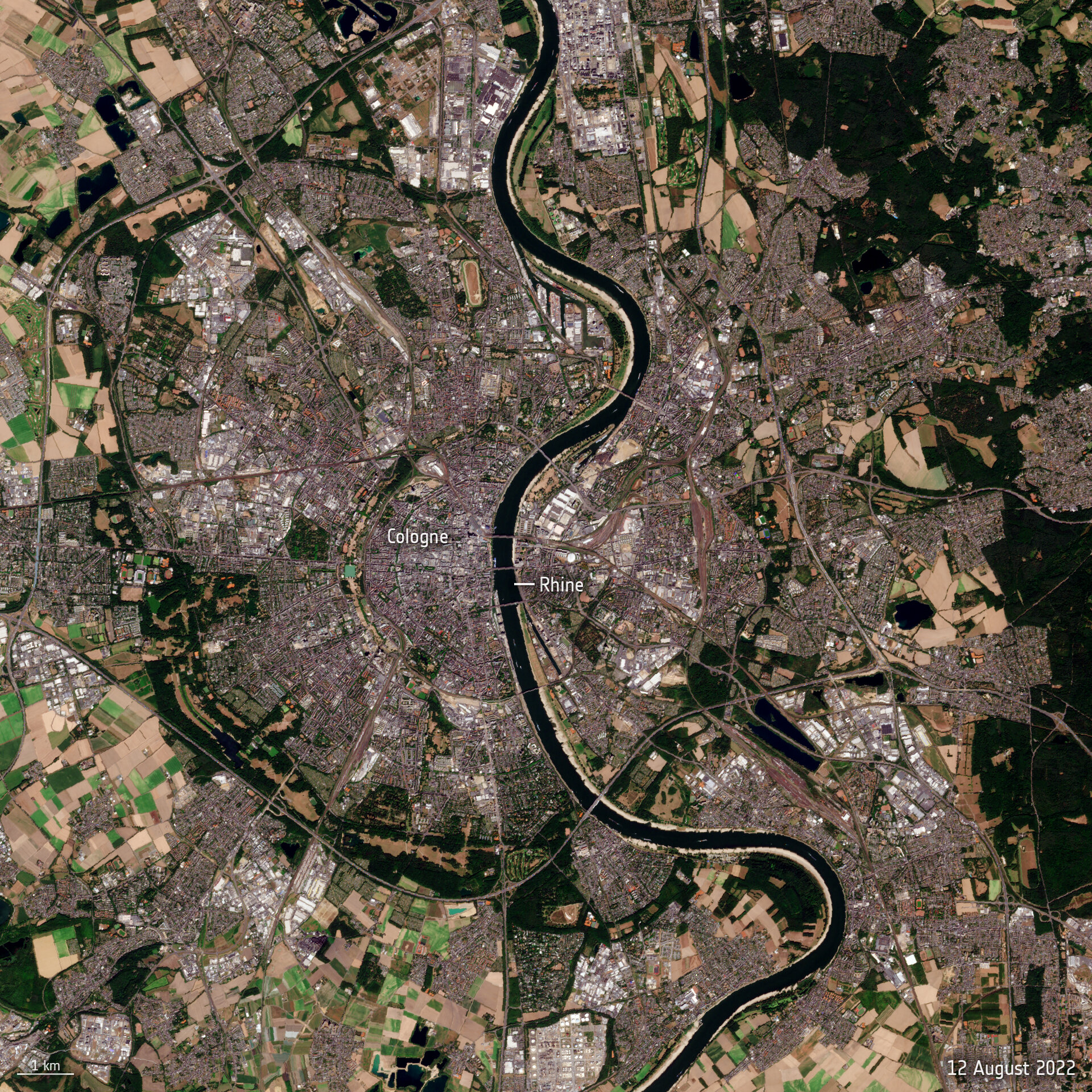 Water levels on the Rhine River, Europe’s second-largest river, have continued in 2022 to drop owing to soaring temperatures and lack of rainfall, preventing many vessels from navigating through the waters at full capacity.

Flowing from the Swiss Alps to the North Sea, the Rhine River is an important shipping route for many products from grains to chemicals to coal. When water levels drop, cargo vessels need to sail with reduced load, so they don’t run aground.

The phenomenon facing the Rhine is common across much of Europe after an unusually hot and dry summer – causing wildfires and water shortages. 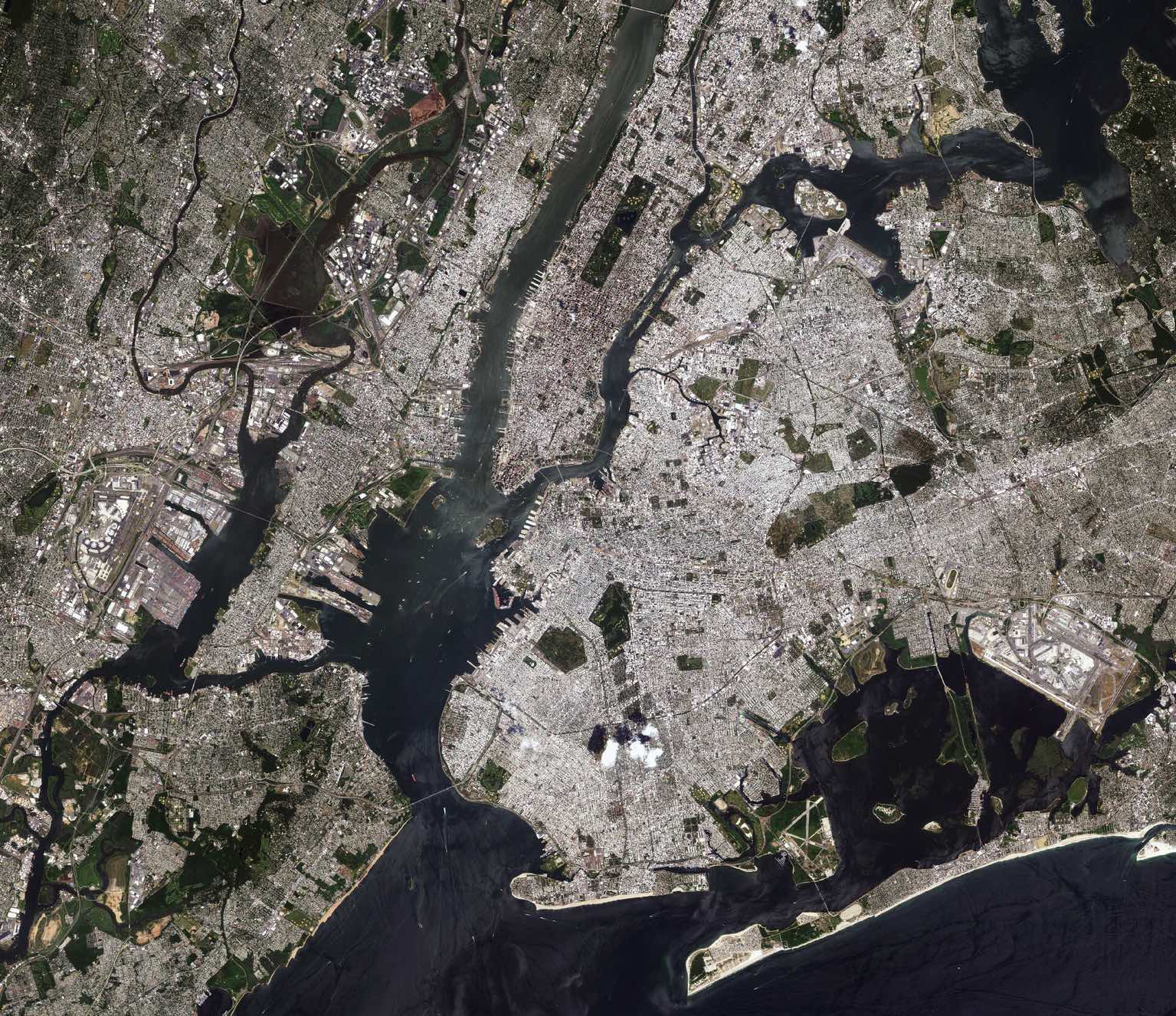 This satellite image covers part of New York City, including the island of Manhattan at the centre, the Brooklyn and Queens boroughs on the right and the Bronx along the top-right. Staten Island is visible in the lower left, while the upper left side of the image is dominated by part of New Jersey.

With over 8 million inhabitants on a limited amount of land, New York City is one of the most densely populated cities in the United States. The city has a long history of land reclamation, most notably on the southwestern tip of Manhattan. This area was once part of the Hudson River before rock excavated during major construction projects and sand dredged from the harbour were used to create the area known as Battery Park City today.

With the populations growing across the world’s cities, apart from building vertically, land reclamation is a common practice for meeting habitation and agricultural needs, among other uses. 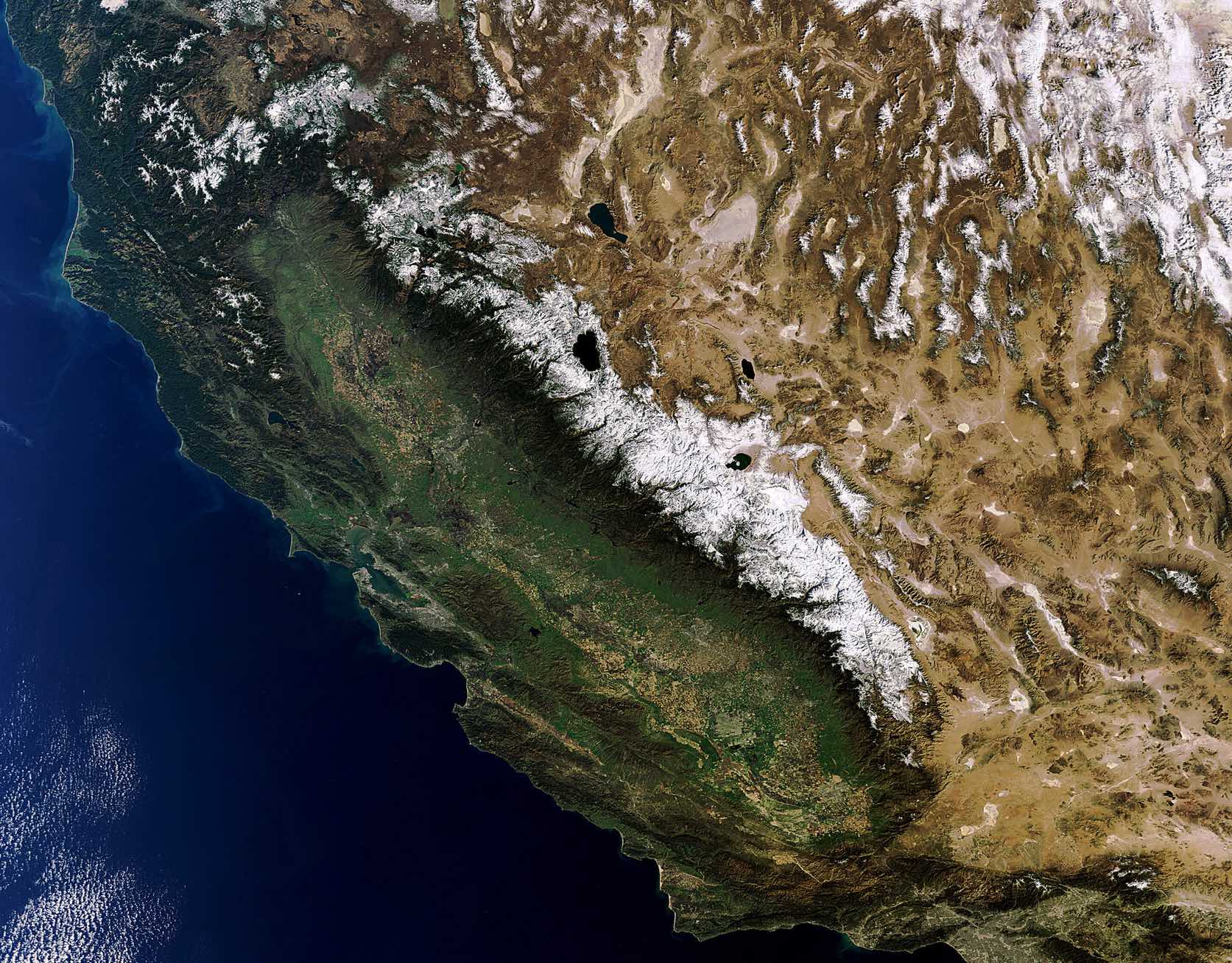 The contrasting landscape of the western US states of California (left) and Nevada (right) are highlighted in this image, acquired on 9 February 2011. The Sierra Nevada mountain range (snow-capped) runs along California’s eastern edge. Lake Tahoe (visible) is located in the Sierra Nevada on the California–Nevada border. Also visible in the image are the California cities of San Francisco (whitish area on the peninsula surrounding the San Francisco Bay, centre left) and Los Angeles (sprawling grey area, bottom left). 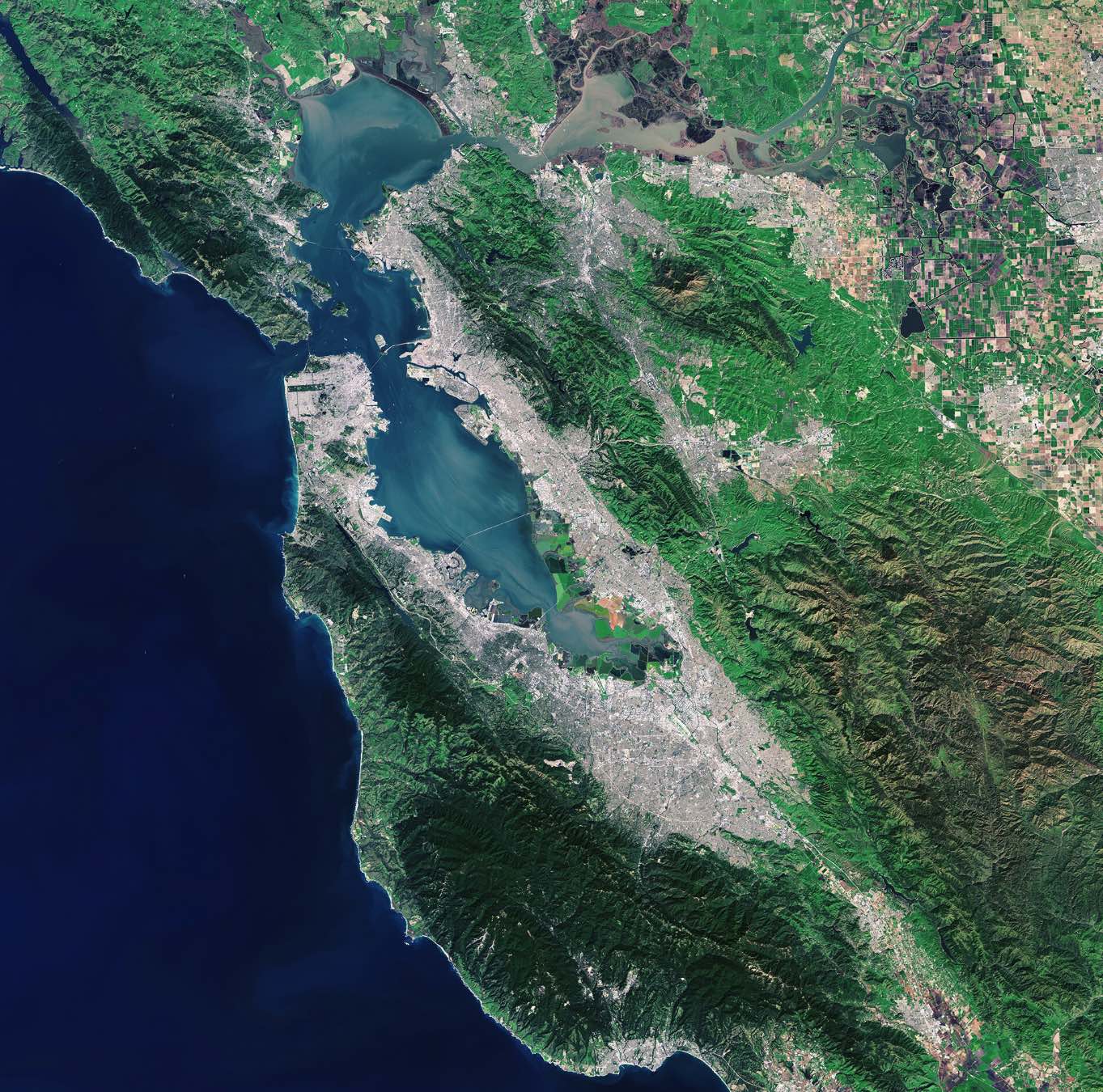 In the upper section of the image from 2015, we can see the rivers’ delta and the brown, sediment-filled water flowing down into the bay. The colourful patchwork in the centre of the image is a collection of wetland areas including salt ponds, salt marshes and mudflats.

The city of San Francisco is on a peninsula in the centre left section of the image. The Golden Gate Bridge which crosses the opening of the bay into the Pacific Ocean between San Francisco and Marin County. What appears to be a straight line running diagonally from the San Francisco Peninsula down through the forest is the San Andreas Fault. This is the border of two tectonic plates, and is responsible for the high earthquake risk in the area.

Starting in the top-left corner of the image and running diagonally to the south is the San Andreas Fault. This is the border between the North American and the Pacific tectonic plates, and is responsible for the high earthquake risk in the area.

Differences in land cover are obvious in this image. Surrounding the Bay we can see densely populated urban areas in white/grey, while forests and park areas appear in shades of green. In the upper-right corner, we can see geometric shapes of large-scale agriculture, with fields in different colours depending on the vegetation type.

Distinguishing between different types of land cover is an important task for Earth-observing satellites, helping us to understand the landscape, map how it is used and monitor changes over time. 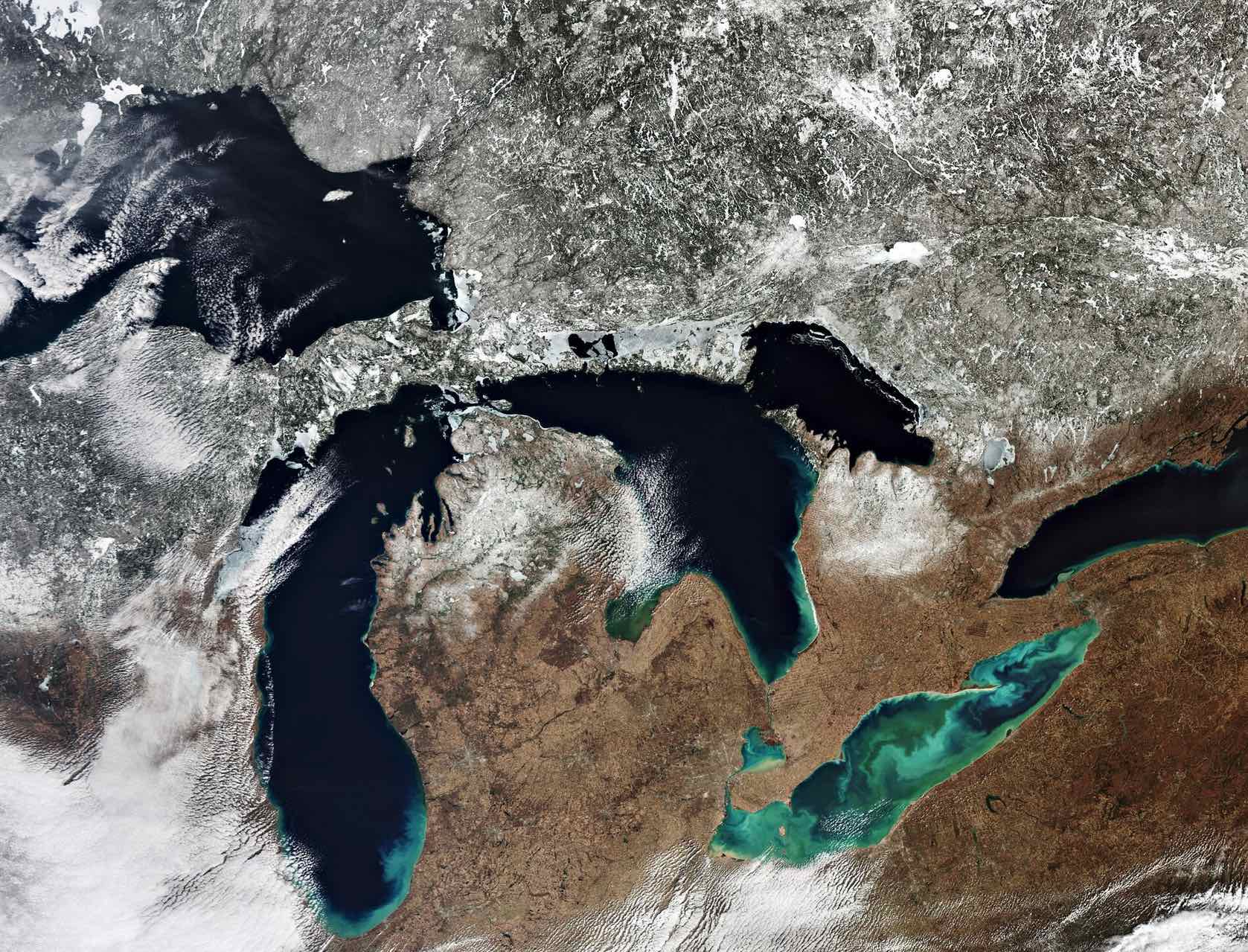 Around 100 000 years ago, a major ice sheet formed over most of Canada and part of the US. As it formed, giant glaciers flowed into the land carving out valleys and levelling mountains. As higher temperatures began to melt the ice sheet, meltwater filled the holes left by the glaciers.

Many of these holes today still contain water and formed the thousands of lakes across central USA and Canada. The biggest remnants of this process are the Great Lakes. The lakes drain roughly from west to east and empty into the Atlantic Ocean.

Lake Superior, the northernmost and westernmost lake, is the largest and deepest of the Great Lakes. It drains into Lake Huron via the St. Marys River at an average rate of 2000 cubic metres per second. Lake Michigan lies south of Lake Superior and connects with Lake Huron through the six km-wide channel Straits of Mackinac in the north. Lake Huron is the second largest of the Great Lakes and is bounded by Michigan, US, on the north and by Ontario, Canada, to the east.

Lake Erie is the shallowest and southernmost of the Great Lakes. Green algal blooms are visible on the lake. These toxic blooms have been a problem for the lake in recent years. Caused by heightened levels of phosphorus – found in fertilisers and common household products – finding its way into the water, these blooms have caused harm to the lake’s fish population.

Lake Ontario is the easternmost of the Great Lakes and also the smallest in surface area. It is bounded on the north by Ontario, Canada and on the south by New York, US, whose water boundaries meet in the middle of the lake.

In this image, captured in March 2020, a large quantity of ice and snow coverage is visible north of the lakes, yet the amount of ice cover on the lakes is minimal – extremely unusual for the ice season which typically runs from 1 December through 30 April.

Parts of the Great Lakes typically freeze every winter. As Earth’s climate changes, rising air and water temperatures have led to less ice cover on many lakes in North America, including the Great Lakes. Ice cover on the Great Lakes can fluctuate dramatically from year to year, depending on several patterns of climate variability. Years with lower-than-normal ice cover appear to have become more frequent during the past two decades.

The two identical Copernicus Sentinel-1 satellites carry radar instruments, which can see through clouds and rain, and in the dark, to image Earth’s surface below.

Here, hundreds of radar images spanning 2016 to 2018 over the same area have been, compressed into a single image.

The sea surface reflects the radar signal away from the satellite, making water appear dark in the image. This contrasts metal objects, in this case ships, which appear as bright dots in the dark water. Boats that passed the English Channel in 2016 appear in blue, those from 2017 appear in green, and those from 2018 appear in red.

Owing to its narrowness, as well as its strategic connection of the Atlantic Ocean and the North Sea, the Channel is very busy with east-west ship traffic. Because of the volume of vessels passing through daily, a two-lane scheme is used, in order to avoid collisions. The two lanes can easily be detected in the image.

Many vessels crossing at the narrowest part of the English Channel can be seen in the far right of the image. Connecting Dover in England to Calais in northern France, the Strait of Dover is another major route, with over 400 vessels crossing every day.

The cities of London and Paris, other towns and buildings and even wind turbines in the English Channel are visible in white owing to the strong reflection of the radar signal.

THE EUROPEAN SPACE AGENCY (ESA) is an intergovernmental organization based in Paris of 22 member states  dedicated to the exploration of space, with the purpose of "providing for, and promoting, for exclusively peaceful purposes, cooperation among European States in space research and technology and their space applications."

Human Places We Know Way Down There
Faces of the Planet: Landscape Photography From On High
Centaur Rings from beyond Saturn
Hommage to 'Models Sitting on Sand Dunes’
Stalking the Unnoticed Layers in Nature

Faces of the Planet: Landscape Photography From On High
Centaur Rings from beyond Saturn
Hommage to 'Models Sitting on Sand Dunes’
Stalking the Unnoticed Layers in Nature
Stories from a Starwoman