Centaur Rings from beyond Saturn

Imagine standing on a bare, bumpy landscape and looking up to see two tight, twinkling arcs, running parallel across a star-spangled black sky. Imagine being on an isolated, icy world small enough for Ireland or Newfoundland to contain its shadow, encircled with rings that create exactly that view from its surface.

The 258 km-wide world is called Chariklo and was actually discovered in 1997. Located deep in the chilled desolate emptiness of the solar system beyond Saturn, it is the largest of an innumerable collection of worlds called the Centaurs, which orbit independently in the realm of the giant gas planets: Jupiter, Saturn, Uranus and Neptune. Centaurs are small and solid, like the asteroids that orbit a lot nearer to us. But they are rich in frozen ices — like the Kuiper Belt worlds such as Pluto that lie beyond Neptune's orbit — or even comets that spread out to the solar system's edge.

They would shine — perhaps even twinkle — like magical highways in the blackness of space . . .

All the gas giants have ring systems (Saturn's just happen to be the largest and most spectacular). Until now, we thought that the only rocky body in our solar system with any chance of a ring system would be Earth, and that is only if the impacts (amongst the space junk orbiting above us) reach a critical level and start an uncontrollable cascade that mash all our low-orbit satellites into smithereen — as happens in the film Gravity. 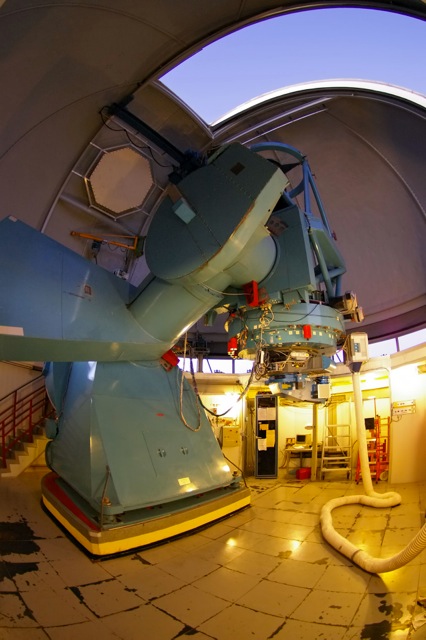 What Dr Martin Dominik's team at the University of St Andrews has just announced is that Chariklo has a two rings, in a system just over 800 km in diameter. Last June, knowing that Chariklo would pass in front of a star when viewed from South America, they were ready to watch the occultation — the star's light blinking out — with a European Southern Observatory (ESO) telescope at the astronomy complex high up in Chile's Atacama Desert, where the air is exceptionally thin and clear. What they didn't expect was for the starlight to dimming momentarily, twice, just before the expected occultation, and do the same just after. It meant that there were symmetric structures around Chariklo — and they could only be rings. Dr Dominik reports that 'everything happened within just 20 seconds. Resolving the rings only became possible by acquiring as many as ten image frames per second.'

Planetary rings are not solid discs with holes in the middle, like gramophone records. Rather, they are belts of myriads of lumps and particles that have settled into adjacent orbits, which gravitational forces have flattened out. Saturn's main ring system is over 73,000 km wide from inner to outer rim, but Chariklo's spans just 18 km, its two rings only seven and three kilometres wide respectively. Even so, they would shine — perhaps even twinkle — like magical highways in the blackness of space, because water ice has been identified in them. No ring system is permanent, and without stabilising forces, Chariklo's 'would dissolve within around 10,000 years only' Dr Dominik said, responding specifically to The Journal of Wild Culture.

He continued: 'We believe they could be stable on a time-scale of millions of years. We consider two mechanisms that stabilise the orbits: the presence of "shepherd" moons (as in the case of Saturn), or the rings being in stable resonance orbits arising from the existence of higher-order gravity terms because of the non-spheroid shape of Chariklo.' 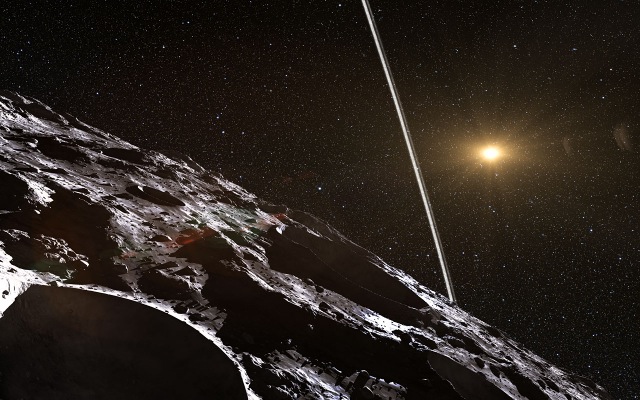 What does it all mean? First, what a powerful tool the observation of occulations can be! Because of it, we now know of 1800 exoplanets, or planets orbiting other stars, the majority of which have been found by NASA's incredible Kepler spacecraft, fully operational until last year.

Astronomical occultations are now revealing surprises closer to home. Our own Solar System still has the power to amaze. No-one dreamed that we'd see rings on a world like Chariklo- it's just so tiny. If Saturn was a beachball, Chariklo would be about the size of a sesame seed. But unlike Saturn, Chariklo is something you could stand on. One day, if humanity spreads into space and has outposts in the solar system, astronauts may do that- and what a view they will behod

In Greek mythology, Centaurs were chimeras, men with the bodies of horses. Chariklo was actually a nymph married to one of them. It seems she's been calling Dr Dominik's team.

How did they know it was her?

It was just two rings.

HERBERT WRIGHT is a London-based author and journalist specialising in architecture and art. He studied Physics and Astrophysics at the University of London. He is currently contributing editor of Blueprint magazine, columnist on the Royal Institute of British Architects Journal, and contributor to le Courier de l'Architecte.

ERICA GLOVER is an illustrator, graphic designer, and an Associate Designer of The Journal of Wild Culture. She lives in Montreal.

Centaur Rings from beyond Saturn
Stories from a Starwoman
Peak Humanity and How to Avoid It
Faces of the Planet: Landscape Photography From On High
Human Places We Know Way Down There

Stories from a Starwoman
Peak Humanity and How to Avoid It
Faces of the Planet: Landscape Photography From On High
Human Places We Know Way Down There
In the Shade of a Frond