falling on a cabin roof in a wood.

He said it was whimsy the way

he bombarded me with drawings

of deer and foxes, called me La Merle —

but I think he had me in his sights.

I didn’t flinch when he thrust his filmy eyes

You see with your brain, he said,

as he stumbled the length of my spine.

I let him track the curve of my breasts,

trace the folds of my labia.

In his studio I could hear lambs

squealing, smell ghost of horse in the air.

against the walls. His trees dripped

When he undressed I couldn’t move

my eyes from his orange hairs

to fix them on the flesh mark

he said had magic powers.

But when he lifted his sweater – revealed

the cavity in his chest — I gasped.

They are angels, he said,

pointing to raindrops on the skylight.

I lay my head in the hollow

of his ribs, listening to the catch

of his echoing breath, the bark of a fox

carried on the wind. This is Eden, he said.

I can’t deny I offered myself:

I’ll do anything, I said.  And instantly

it began. First my skin broke out — erupted

in mysterious lumps — then my periods

in my ovaries, while I slept, and cut.

Nine months of chaos and grief

and all the time he whispered:

Then one night, under a thunder moon,

he filled a cotton bag with lambs’ wool

and left me in the wood.

I had escaped from Eden —

slipped featureless from his canvas.

The Antichrist, I thought later,

as my broken body healed

At first I couldn’t believe my luck —

but now I try to block it out — play arias

from Rinaldo loud to drown the sound

of acorns clattering on the roof. 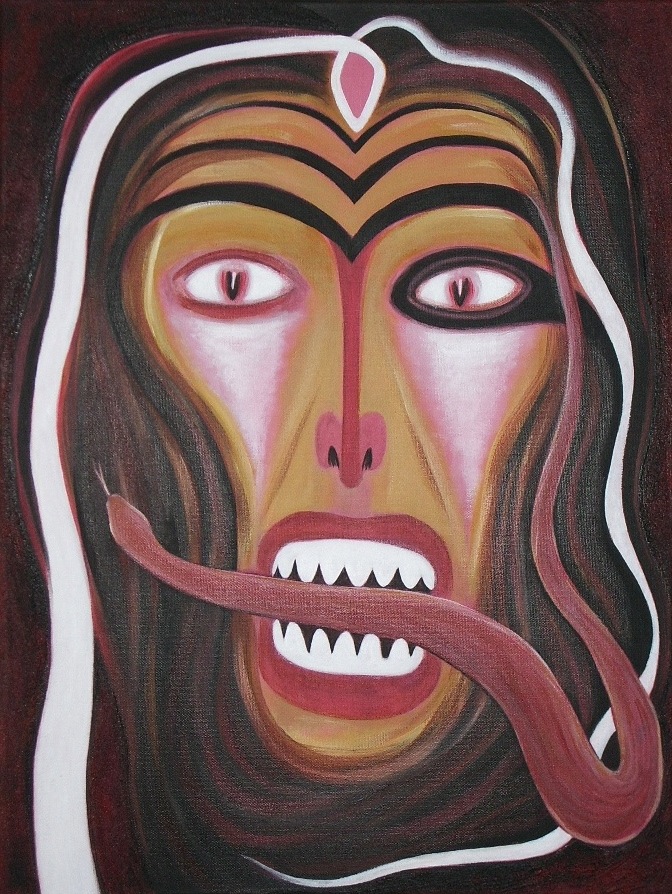 This poem was first published in The Journal of Wild Culture on December 11, 2013.

ELIZABETH BARRETT is a poet, writer and lecturer who trained as an English teacher. She received a doctorate in history and politics and now works in education research and as a university lecturer at Hallam University in Sheffield. Her work has included writer-in-residence in schools, prisons and radio, and creative writing tutor and poetry editor. Elizabeth has received several awards for her poetry, including an Arts Council of England Writer’s Award in 2000. She lives in Sheffield.

See some of Elizabeth's works, and her blog about living with autism.

Roxanna's site and Facebook page, and to support her upcoming raffle, go here!

[Roxanna is a one-of-a-kind artist and illustrator and few deserve your support more than she does. — Ed.]

Nature is Satan's Church
You Are the Best Presents Ever
My Headstone Read, 'Beloved Daughter'
Mind the Sap I: Deep Clean
Not Denying Life, Not Denying Death

You Are the Best Presents Ever
My Headstone Read, 'Beloved Daughter'
Roxanna Bikadoroff: The Spirit of Art Through the Female Lens
Not Denying Life, Not Denying Death
Stalagmite