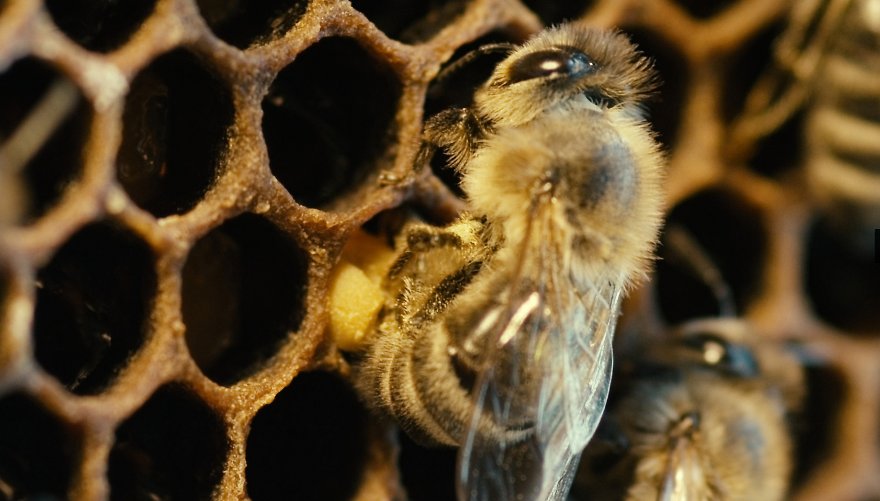 In its opening moments, More than Honey alights on two worlds which couldn’t be more dissimilar. Firstly a gross magnification of the abstract geometry of the hive, with its wild swirling eddies and rigid hexagonal honeycomb. Incomprehensible, otherworldly, bee brothers hew off the cap of a lidded hollow to pop out the prized queen. Then: zoom out to the Swiss mountaintops, a monumental backdrop for a goaty pensioner sporting a stepladder and a pipe and staunchly scaling the wildflowered cliffs to attend to his own private colony of bees. Played straight up without comment, these two silent picture postcards address our unresolved sense of the wilderness. On the one hand the messy mysteries of microscopic nature, and on the other our kindly, or callous, cultivation of it.

Humans have a problem with insects – we can’t relate to them. They star only in sticky horror fantasies and children’s picture books - Winnie the Pooh, Alice in Wonderland - as a simmering sinister presence. But even the bumble bee, with its endearing fuzziness, is absent here. Numbed as we are to nature films in HD, film-maker Markus Imhoof, the man behind More than Honey, pickles our defences by delivering tryst after tango of careening bees in hundreds of states of fortitude and frailty.

The dominance of human civilisation has led to the death of bees on an epic scale.

Conceived in order to underline our complex relationship on bees, and the increasing fragility of their existence, More than Honey shows us live bees shipped off in stapled cartons for next day delivery, taxied by Red Bull-swilling runners from California to North Dakota in 48 hours. Classic colony collapse disorder. Gentle queens and docile drones in Europe, North America and China, bred for their honey, swilling antibiotics dissolved in sugar water. They can no longer survive without medicines. Put simply, the dominance of human civilisation has led to the death of bees on an epic scale. From the 20-hive farms hawking queens for $60, right up to the top.

Follow the Miller Honey Farms Toyota, for example, to a cornucopia of Californian Almond trees. They fill the screen and like anything in perpetuity lose all sense. The blossom is blinding and the sound of the company car barely interrupts the buzzing of the bees. “That’s the sound of money” our tour guide tells us, “4,000 hives at £150 per hive.” The multi-million dollar almond business relies entirely on pollination by bees. 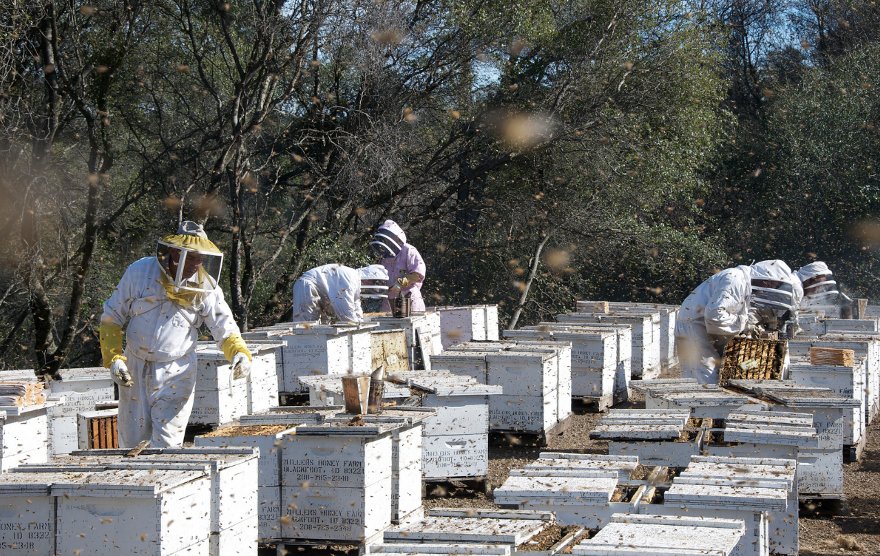 In true Ludwig Bemelmans’ Madeline-style, we are educated in the craft of honey harvesting, and its roots in small business - the honeyed sweets Imhoof’s uncle sold in handpainted tins – but thankfully no time is wasted on mourning his and our past.

Beekeeping has always amounted to stealing honey from the hive and stopping up the gaps with cheap sugar. Now industrialised beekeeping is of course obligator,y but what happens, Imhoof asks, when we have more than the blood of bees on our hands? We see surreal parodies of commerce-gone-mad in the regions of China without bees, where the sparrows were once killed under Chairman Mao, the insects decimated, and where city dwellers now extract fertile pollen from rural apple blossoms to be hand-painted back onto plants in polluted wastelands. Sneakered farmers dressed in dusty camo stand perched in trees like so many peaky-looking partridges.

It seems to take all the running you can muster to stay in remotely the same place.

Our future must rest on a new kind of cultivation. As the man from Miller Honey Farms points out, most humans are motivated by greed and fear. “I don’t know how to shrink a business or a lifestyle and be happy. That’s not in my DNA.” Now only the advancement of science and research can oil the wheels of expansion.

Killer bees, Africanised honey bees originally crossbred in Sao Paulo, are resistant to the mites and disease affecting other bee populations, but they’re also, Imhoof tells us, “as dangerous as wolves”, something humans could never live with. Meanwhile the director’s son-in-law, an immunology student, fills his backpack with honey bee queens and heads for the wilds of a small island research centre specialising in the cross-insemination of Australian wild bees - the last healthy bees on earth. Nonsensically, as in the case of Alice and the Red Queen, it seems to take all the running you can muster to stay in remotely the same place.

ROSIE JACKSON is a freelance writer and editor, the former Assistant Managing Editor at The Journal of Wild Culture, and photography art director.

More Than Honey is now out in cinemas, and on DVD. You can order your copy now.

More than Honey
Exploring the Deliciousness of Insects
Pestival returns to London
Digested Science - Bees, Bacteria and Biofuel
Why the Bees are Dying