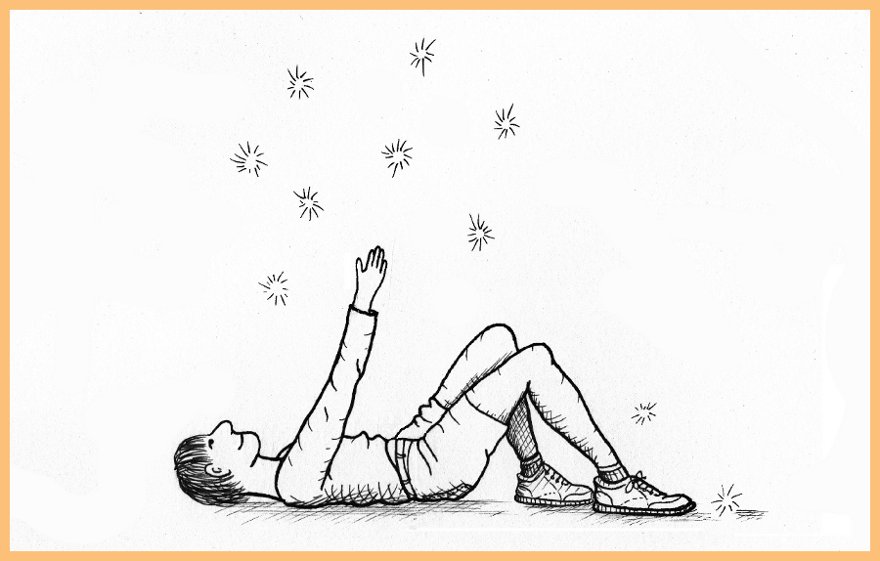 For many years, a family of miniature white fluffy creatures lived on a small platform beneath the kitchen table. Squashed into an old Violet Pastilles tin, they clung to one another in a deep sleep. Occasionally I'd lift the lid, pull them apart and let them float about in the dusty air like clouds of jellyfish through thick plankton. We called them "Dingles". I often lay down on the floor and watched the Dingles swirling about above, intermittently waving my arms to create turbulence.

These weren't the only magical creatures to set up residence at Newtonhill. For a start, there were "Guineas"; small beetle-shaped critters that grew inside water melons and lived the rest of their lives in an upturned hat. As charming as they were, their larger relatives – the “Treasure Guineas” – were far more useful. During the winter, Treasure Guineas would be filled with hot water just before bed, sealed, and carried away to snuggle at our sides until morning. The feeling of a warm Treasure Guinea was particularly comforting whenever "Old Newt" was on the prowl.

Old Newt was the ghost of Newtonhill; the ghost of a man who'd lived in the farmhouse a couple of generations before. His reputation had preceded him. He'd been an alcoholic with many children, and had farmed the land long before the main road had been laid. His family, perhaps seeking warmer climes, had emigrated to Australia. We used to dig up the man's beer bottles in the garden, wash them, and place them on windowsills around the house where their coloured glass could catch the sun. I'd often hear him at night, opening doors and clattering about in the darkness.

One summer afternoon, Old Newt's descendants knocked on our door, out of the blue. They were on a brief visit from Australia, and couldn't resist dropping by Newtonhill. They showed us photographs of the house as it had been a century before, with ladies bent over, tossing grain to their poultry. After that they just wandered around the property looking lost. These days I rarely return home myself. When I do, I probably look just as lost as they had. Inevitably though, some of the old memories come flooding back. It's only at these times that I recall the rich vocabulary that I once shared with my brother and sisters, and just how much of it slipped away without anyone really noticing. Much of this vocabulary came to life through the process of drawing.

Chickens were always drawn with vastly over-sized upper bills, and in this state they were referred to as "Pekas". These caricatures hardly resembled an actual chicken whatsoever. Similarly, old men were drawn with huge Gallic noses, top hats, and an assortment of outrageous moustaches. They were called "Grozzles", while the old ladies we drew were referred to as "Grunions". Rather than reflecting physical reality, these drawings were part of a shared imagination that only ever revealed itself on paper. Some of its secrets were filed away in a blue plastic suitcase that my brother and I kept out of sight in the loft of the goat shed.

Now and again we'd meet there for mud tea and a plate of stone potatoes in the makeshift kitchen that we'd assembled beneath the roof. On one occasion we even invited some brothers to join us from down the road. We were all roughly the same age, but they'd always been something of a mystery. We'd often walk past their window at night and see blue light beaming out across the countryside. I imagined them sitting in front of a television, hypnotised as it slowly sucked away at their brains. Their life, full of computer games, tractors and footballs, was about as alien to us at that time as Pekas and Dingles must have been to them. Needless to say, they didn't quite know what to make of the mud tea.


Next up: Vol VIII, Percy's Fiddle, to be published Friday 19th April!