Connecting Nothing with Something

Category
Prose, Poetry & Poetics
Movements & Communities
Borders & Crossings
Connecting Nothing with Something
by Kit Caless
Published: Aug 08, 2013
Standfirst
Kit Caless, co-founder of Influx Press, independent publishers of site-specific literature, discusses the fetishisation of the coast and the origins of their new anthology of coastal writing about the south east of England.
Body 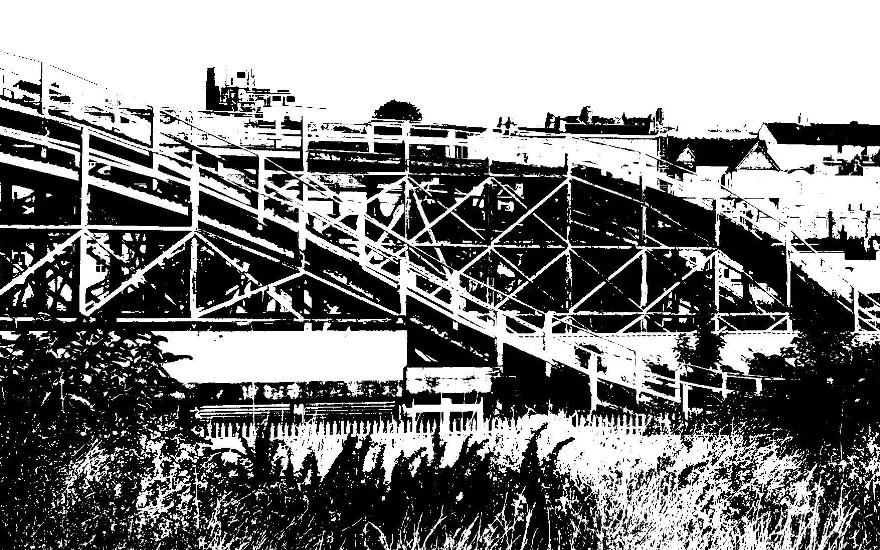 I grew up in the 'garden of England', a boy of Kent, the right side of the Medway. My home was a village called Barham, set deep in the Elham Valley. My mother still lives there, in the same house, with the same field backing onto our garden. The same crops are rotated each year, still. Rapeseed, cabbage, barley, corn. Nothing has changed to the rural landscape surrounding Barham, or at least any change has occurred so slowly that I've failed to notice it.

Covet Woods, to the west, still entertains vagrant mountain bikers, who pilgrimage to its bomb craters and tree-root-ridden riding paths. The Nailbourne river appears at random, every five or six years, trundling under and over the roads, alongside the village green at great pace until it runs out of energy and seeps back into the sod. Other woods nearby in Denton, Kingston and Bishopsbourne host bluebells, wild garlic, wood anemones, primroses, violets, early purple orchids and brambles.

I was given freedom to run around these places at my whim. My childhood friends and I moved from biking and climbing trees in the woods and fields surrounding Barham to getting drunk and stoned with female companions in those very same places. Memories of my youth in Barham are predominantly rural – the smell of thick woodland mud, the sharp taste of wild blackberries picked too early, the sound of warblers, the circling of kestrels and sparrowhawks.

Yet despite all this, when I describe Kent to people who don't know it well, I tell them I live near Dover.

This isn't a lie. Barham is eleven miles from Dover and Dover is a recognisable place name to most people. I describe my childhood through a coastal lens, unless pushed for some real, heavy details. I talk of walks along the cliffs, rock pooling at St Margaret's bay, bucket and spade days on Joss Bay (between Margate and Broadstairs), fish and chips in Hythe, tar-stricken sand at Dymchurch, and working on P&O Ferries in my late-teenage summer holidays. Ask me more questions and I’ll come round to the inland truth. I’ll tell you stories of badger carcasses in our shed, the comforting sound of a combine harvester and church bells announcing Sunday morning in Barham.

The fetishisation of the Kent coast has a particularly long history in Britain, but tends to come in fits and spurts.

I had never really noticed this until I started work on an anthology of coastal writing for Influx Press, Connecting Nothing with Something. The book is a collection of short stories and poetry set along the coast of Kent and Sussex, from Whitstable all the way down to Newhaven. Why do I hold this larger narrative back? I think it's to do with what I consider to be the fetishisation of the English coast. From both sides. It is fetishised by the media, urbanites, artists, academics, writers, musicians, government. Fetishised by me, in my oral storytelling, in my own personal mythologies.

The fetishisation of the Kent coast has a particularly long history in Britain, but tends to come in fits and spurts. Perhaps it started with the day-tripping Victorians, and continued via TS Eliot's condemning, through to the 1950s cockney pleasuring, all the way up to Tracey Emin. And it seems to be on the rise again. With more middle class money in the east end of London, there are more people looking for a day out, and a new high-speed trainline direct from Stratford to help them achieve it. Margate has recently acquired the moniker ‘Hackney-on-Sea’. You only need to watch the Channel 4 programme about Mary Portas trying to save the Margate high street to see what's happening. She refashions the old town with a throwback pier aesthetic; bunting, candy floss, cockney clichés, retro-neon and how’s-your-father innuendo. It’s Margate for a city crowd that wants the mediated version of the seaside town. There is no thought to the future, just a pastiche of the past.

It was far easier to talk about Kent from these shared experiences, albeit shared via mediation, rather than to bore people with my own truths. So my childhood became a joke about the Dreamland rollercoaster breaking down. Bucket and spade trips to Broadstairs became kitsch and hilariously '1980s' in conversation. Working on P&O Ferries became a tale of booze-cruising grannies and dodgy geezers.

The coast has an ingrained mythology that simply won’t go away. Perhaps it's to do with the wilderness of the sea, an unknowable force bigger than any human construction. Maybe it's because seaside towns are places to escape to, and escape from. They promise liberation for the visitor, a place to let yourself go, loosen your morals, find darker vices that won’t follow you once you’ve returned to your city. The scuzzy neon of Margate speaks a language we all understand. The term ‘pleasure beach’ is self-explanatory. The marshes of Romney invite memories of smuggling and a desolation that allows things to happen away from a watchful eye. The coastal identity of Kent doesn’t fit in with the ‘garden of England’ narrative that my idyllic home village does. Perhaps that's why I used to tell stories of my youthful experiences on the coast with relish and leave the innocent daisy chain charm of Barham behind.

All this seems to lead to why we are publishing Connecting Nothing with Something. In some ways we're only adding to the canon of literature about Kent, further fetishising it and mediating it. Both editors are from east Kent (Gary Budden from the watercolour capital of the county, Whitstable) and we visit our families using that very same trainline to escape the tarmac pressures of daily life. Perhaps we aren’t that different in our approach to the county of our youth, though the book was formed as a reaction to the increased interest in places like Margate and Deal that we saw around us in London, in the print media and on television.

Influx Press was set up to find these hidden stories, the tales never told.

However, I think we have produced a book that is very aware of this danger. In Connecting Nothing with Something, co-editor Gary Budden and I have tried very hard to avoid publishing stories that retell expected narratives. While we both feel we may have developed an expectation placed on the coast since exiling to London, our childhood experiences tell us that there are many stories in Kent to be told, especially ones that you don’t hear told to an audience desiring a certain narrative. In Connecting Something with Nothing, we have stories of Richard Burton in search of mystical truths in Romney Marsh, fantasies of Margate punching TS Eliot in the face, raving in Lydd airport, and riots in Hastings. Nearly all of our contributors have livedin Kent and Sussex or still do.

In many ways it is similar to a previous Influx Press anthology, Acquired for Development By, a collection of stories set in our current residence, Hackney. With that book we were careful to produce alternative narratives, written by authors with a lived experience of the place. Additionally, just as Acquired for explored a changing urban area, so Connecting Nothing explores a changing rural area. The inner city is also a place you can lose yourself; a potentially anonymous, amorphous place to disappear in – much like the coast. Sometimes the city can feel as vast and powerful as the sea. The inner city shares similar problems with the coast too; high youth unemployment, violence, crime and a weary cynicism potentially caused by the neo-liberal destruction of collective identity.

There are differences though. I see much more of nature’s influence in Connecting Nothing with Something. Despite human endeavours to control the coastal wilderness, it remains a force. The book features recurring appearances of herring gulls, cliff-top faunas, marshland cacophonies and the overwhelming presence of the salty water. There is also a melancholy present in the collection that only the coast can induce. While the city is speed, electric, blink-and-you-miss-out, the coast feels more languid, more reflective. This is probably down to the tides, the dead winters and the knowledge that you're living at the edge of the country, not its beating heart.

Influx Press was set up to find these hidden stories, the tales never told. We strive to produce work that maps an area to a great psychological depth. Through fiction and poetry we try to create books that help the reader see beneath the surface of the specific site we have chosen. It is the narratives that run under the official versions that interest us and we hope, interest our readers too. We return to Hackney in our next book, but focus on the semi-liminal land of the Hackney Marshes with our first novel Marshland - dreams and nightmares on the edge of London by Gareth E Rees. After that we are publishing a series of eBook essays exploring the Bullring in Birmingham, Maine Road in Manchester, Southend-on-Sea and ghost estates in Ireland.

In many ways all our publications are connecting nothing with something. Connecting the stories we never knew existed to the grander narrative of the day. Connecting hidden and discarded places to deeper maps of history and psychology. As Travis Elborough says in his foreword for this coastal anthology: “it’s all about making the right connections, isn’t it? Nothing with something. You’ll see.”

Order your copy of Connecting Nothing with Something now!