Category
Sport & Recreation
Psychology & Parapsychology
Movements & Communities
Stadium Fervor as Renewable Energy!
by Fred Fiske
Published: Oct 21, 2017
Standfirst
What to do with all that stadium passion? Surely we are not the first to ponder that it might have some invaluable use other than, in particular cases, a place for grown-ups to play cowboys and Indians. Take Tallahassee for instance, where the tomahawk chop is a favorite form of emotional semaphore via spiritual sublimation — might they be ready for a conversion experience? If so, this author has a plan.
Body

Doak Campbell Stadium on the campus of the Florida State University in Tallahassee, home to the Florida Seminoles. Record attendance‎: ‎84,409. [o]

I watched two Florida college teams playing this afternoon on television. I enjoy watching college football, as well as the NFL. The athleticism, the long passes, the breakout runs, the superb blocking, the teamwork, the artistry of the special teams, the whole competitive contest. It all thrills me.

Not that I don’t wince over the spastic energy, the body-banging, the concussion-inducing collisions, the wrenched knees, the players down, the limps to the sidelines. I worry about the long-term consequences of this violent sport.

Speaking of violence, one of these teams is the “Florida Seminoles,” with a profile of an Indian as its team badge — and, as far as I know, not by arrangement with the tribe. To show support for the team, Seminole fans employ the “tomahawk chop.” Presumably most of them know they are re-enacting the gesture made by indigenous peoples who were executing, assassinating or otherwise slaying their enemies, including white Americans.

I imagined they were content in the knowledge that they were just being playful, not summoning the spirit of violent retribution . . .

As I watched the fans — a sea of white faces — gleefully or passionately imitate this historic, deadly act, I imagined they were content in the knowledge that they were just being playful, not summoning the spirit of violent retribution — against their football foes. Even if they were aware of the history, and the disrespect, it’s okay to “tomahawk chop” the rival team and rival fans because, of course, it’s only a silly symbol. It’s all just a game. Who really cares, right?

The cheering in the stadium seemed delirious at times. The fans’ cheers arose not only when their team scored the winning touchdown (actually, they lost), but when they scored any touchdown — indeed, when they “scored” first downs. A bit much? Mass hysteria?

It occurred to me: Wouldn’t it be great if those fans were just as enthusiastic about, say, a vote in Congress to approve federal legislation that would extend health benefits to more of the poor? Or to affirm an international accord to fight global hunger, pollution or disease. Or increase the peace? 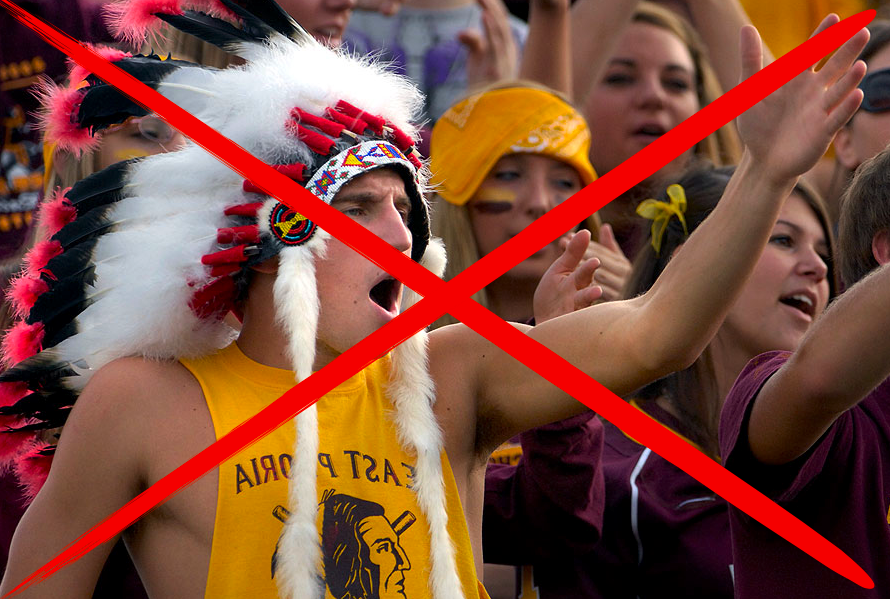 All in the name of football . . . Employing the customary 'tomahawk chop' in Tallahasee recently, a self-appointed tribal representative opens to higher levels of spiritual imperfectability. [o]

Imagine the play-by-play call: “Ladies and gentlemen, the vote tally is conclusive: the Child Safety Act of 2017 is approved!” The crowd goes wild.

Or this one. “Ladies and gentlemen, the president has just signed the Indigenous Peoples Rescue and Reconciliation Act.” The crowd goes wild, but without tomahawk chops.

Some say it will never happen. GIven the state of affairs these days, I wonder. Nevertheless, this level of enthusiasm toward college football is out of proportion. It feels like sublimation, or displacement.

In response to my venting, a friend wrote, “The energy that used to go into religion, the pie-in-the-sky-when-you-die, has been rechannelled into sports. It is vitally important, and keeps the hoi polloi distracted. And it makes money for the people involved. Religion inspired most of the battles within and among European countries. Between wars the battles were mimicked in tournaments. Heraldry owes more to these tournaments than to real battles now mimicked in sports.” 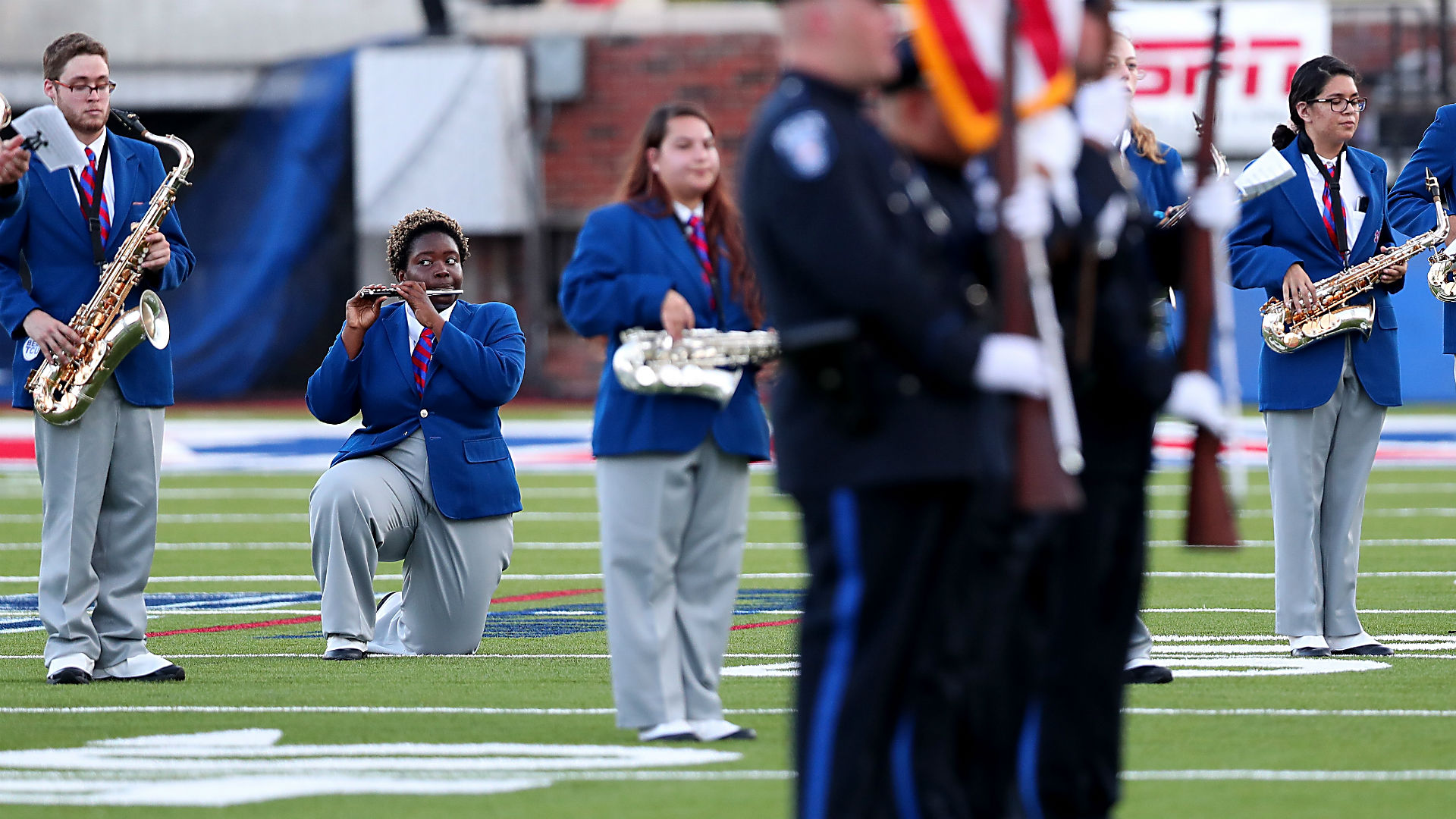 Might the current mode of using sporting events as platforms for political expression mark the beginning of a whole new trend in legislative process and lawmaking? [o]

Another friend (many of them seem galvanized by this topic) suggests that “the central reason it won’t happen is that the type of energy in those football crowds is ‘killing energy’. It’s force is tribal force aimed at eliminating the enemy and precisely not at helping The Other.”
I do believe in the ultimate wisdom of the American people, as a whole — mind you, not the mindless cheering of one college football crowd. I have faith that when the choice is stark enough, Americans will resist ignorance and selfishness and do the right thing. Surely they will not give in to bigotry, carelessness or indifference.

Meanwhile, I worry about all those white people who are putting a lot of passion into college football — and the tomahawk chop. ≈©

1  By Andrew Sullivan, in New York magazine, on tribalism.

2  In the New York Times, David Brooks on how we are precisely not a nation founded on tribalism, but on important, other principles.

FRED FISKE, a contributing editor of The Journal of Wild Culture, is an independent journalist and composer and spent his career in journalism, mostly writing editorials for The Post-Standard newspaper in Syracuse, New York. He majored in history and literature at Harvard and received his masters from the Columbia Graduate School of Journalism. He grew up in a foreign service family, living in Bangladesh, Germany, Congo and Iceland. He lives in Syracuse and Florida.

Stadium Fervor as Renewable Energy!
Mother's Democracy Test
The Eyes of Society: Changing the notion of 'policing'
Young people seeing their power
In Step with the Vigil Craze

The Eyes of Society: Changing the notion of 'policing'
Young people seeing their power
In Step with the Vigil Craze
Touched wild . . . didn't know it at the time
A place to be free, or just be