Category
Anthropology & Social Sciences
Intimacy
Borders & Crossings
Black Dog
by Andrea Mason
Published: Nov 27, 2013
Standfirst
DONNA HARRAWAY: Who is this we?
WOLFGANG SCHIMACHER: We, you and me.
DH: I want to know about the dogs.
WS: Not really.
DH: Honest, really true.
WS: You do the same thing that Heidegger once advised: If you want to know about humanity look away from humanity.
DH: That’s all well and good but I also want to know about the dogs.
(A conversation recorded by Donna Harraway from ‘Birth of the Kennel: A Lecture by Donna Haraway’.*)
Body 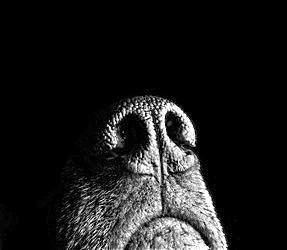 The black dog faces me off. He stands firm, legs splayed, at the top of the park carriageway. I look around. There’s me, the dog up ahead, and one other lady who walks past with a ball thrower and her own dog close at heel. I look again. The black dog stands his ground, still staring. He’s going to bite, I think. What will I offer him to buffer his teeth? There’s no question this dog has it in for me. I stop walking and turn again to look at the woman playing throw ball now with her dog. Is the black dog also hers? Has she noticed he is missing? The dog bears down on me. I step aside in order to test my theory. The dog shifts tack accordingly, in line with my dance, and pulls up two feet in front of me.

The dog barks at me intently, then walks on, throwing in a growl as he passes.

Shit! But maybe he does belong to the woman. I watch the dog go by, and dare to continue when I reckon he’s no longer fixated on me, but then there he is again, ahead of me. He has circled around and is now walking up by the rhododendron border where I usually take a short cut. This is clearly the dog’s patch. I consider my next move; my intended route now seems off limits. I veer left onto a side path just before the rhododendrons, and plough through soggy lawn to reach the inner track, not sure how far back up the dog has gone towards where I wanted to go. I then turn right along a sandy path to rejoin the carriageway. I am now between gates. As I consider my options a woman wearing green wellies, the same as mine, walks towards me with a large smooth-haired black dog on a lead.

‘Did you just put that dog on a lead?’

‘He came hurtling towards me. I thought he was going to bite.’

‘He lost me for a moment. He was probably scared. Would you like to stroke him?’

She seems anxious. I stroke him. He looks a little friendlier. ‘Maybe he thought I was you,’ I say.

‘Yes, from a distance, then realized you weren’t me. That’s why he barked.’

We are here again, both of us. Same time. Same place. I catch sight of him immediately as I round the wide path into the circular carriageway of the park. But wait. He’s not alone. To his left is a second smaller dog. They stand side by side, the large smooth-haired black dog, a Labrador, and a small, white Scottie. My heart begins to beat more quickly, but I do not falter, continuing along the carriageway as usual. I do not, however, take my usual short cut, at the entrance to which they stand sentinel. The black dog’s stance is different today; he seems less alert, less tense. He stares directly at me, but his limbs appear less rigid. Safety in numbers, huh? Of course, choosing a little yapper as your mate makes you look like the big dog doesn’t it? What, I wonder, do they take me for. Have they pegged me as an aggressive person, an infiltrator? I avert my eyes from the Labrador’s gaze; you should never lock eyes with a dog – a bit like drunks - they will spring at you, and hold you in their teeth.

As I approach, the Scottie’s staccato yap, yap yap yap cracks out of nowhere and makes me jump. He advances towards me then retreats, as if held by an imaginary leash tethered at the feet of the black dog. I decide to affect a swagger. I put my hands in my pockets and pretend not to notice the dogs as I pass. I walk in the middle of the carriageway, keeping my distance but not giving them a wide berth. Can’t allow them the upper hand. The eyes of the black dog burn into my back as I pass. The ankle nipper makes a sudden break for it, dashes out across my path and almost trips me up.

‘Fuck,’ I say, as I struggle to regain my balance.

The black dog joins in with a low growl. The little blighter returns to its corner and though I don’t look back I sense them standing staring after me with big grins, tongues hanging out, high-fiving each other in triumph with their paws. Where are their owners? Unusual, in a well to do London park, for stray dogs to be wandering around. Ah, yes, I see them: two middle-aged ladies stand chatting at a distance; the lady with the green wellies and a second smaller woman, but a dog owner no less, evidenced by the thin blue lead she has snaffled in her fingers, which she balls up and snaps out, balls up and snaps out as she talks.

I approach with trepidation. What can I expect today? As I round the first bend I am surprised and a little relieved to not see a dog anywhere at all on the carriageway. Usually a dog and its owner will pass me right and left; there will be dogs racing around on the grass catching balls, cyclists, roller-bladers, and mothers power-pramming, some even with a dog attached on a long lead. Today the park is quiet. Except, no. I can hear something. As I continue up the slight incline the noises increase and around the top of the bend ahead of me come one, two, three, four, five, six, seven, eight, nine, ten dogs. I stop counting as they jump and leap around each other, blurring the distinctions of one dog to another. There’s a Tibetan Lasha, a Weimaraner, a spaniel, a Dachshund, a whippet, a loping Saint Bernard, a pair of Chihauhaus, the white Scottie and the black Lab. I determine to keep walking in a straight line on my chosen course, but am forced to stop, or veer left or right as the dogs chase and run and gambol, barking and yapping, darting erratically in front of my path. At one point one of the dogs, the Weimaraner I think, brushes against my legs as it runs full pelt after the Scotty. I look at the owners as they pass by in a pack, chatting, with their puffer gilets, ear muffs, dog chains slung around necks, galoshes, wellies, Barbour jackets, sheepskins, large-knit jumpers and ruddy cheeks. They shout to their dogs and laugh indulgently at their pets’ antics.

I am on full alert today; fired up, charged, determined. Today I will walk the line. There they are. I spot them immediately as I round the bend. They’re already bearing down upon me. The pack has increased: doubled, tripled. I walk straight ahead determinedly. I will not break step or allow myself to veer off course. When the dogs and I meet it is more of a struggle than I anticipated. It feels like I’m walking through a sludge of fur and limbs and teeth and flappy ears and wet noses, their barking din a symphony of high-pitched squeals, low pitched growls, and in-between yap yappity yaps. My senses are heightened, on red alert, and I glory in the musky dirty scents of dog. I press forward through the melee, but I’m caught out mid step by the two skittering Chihauhaus: my right foot comes down upon a dog’s toe causing me to miss my step; the dog squeals and nips at my hands, which I’ve thrown out forwards to mitigate my fall. I drop face first towards the gravel driveway but am surprised at how easily I hit the path; my front paws meet the ground with ease, almost with a bounce. The stinking scrum of limbs and fur, of canine breath, drool and dribble, races on, its gaggle of owners marching proudly behind. Only one dog stops, isolating himself from the pack. It’s the black Labrador. As I turn to gaze at him he raises his right paw in salute.

Despite my battering the previous day I am unusually excited. I feel with pleasure the cool breeze on my forehead. My senses are keen, alert. I’m disappointed as I round the bend and see no dogs. I trot steadily anti-clockwise along the carriageway, my tongue hanging out a little. As I get closer to the top bend I begin to smell dog in all its fusty, sweaty glory; my saliva pools in my mouth, salty-sweet and sticky. My exalted panting breaths float like white balloons ahead of me in the freezing air. I race on excitedly. We round the top bend at the same moment, me and the pack of barking, yapping, splendid dogs, yet something is different. Something is wrong. The dogs are straining, barking and yapping. As I trot past them, eager, alert, tail wagging stiffly, high, I see that the dogs are all on leashes held by their owners, who are chatting and yapping and yelling at each other and at the dogs. I trot around the circumference of their. The dogs bark and yap, skitter and jump, tangling leashes and leads and chains. One by one the puffer gilets, the Barbours, the sheepskins and the large-knit jumpers go down, felled by the dogs’ leads pulling at the backs of their legs.

I trot on, tail wagging, triumphant.

ANDREA MASON is an artist and writer, director of Literary Kitchen, and a Creative Writing PhD candidate at Goldsmiths. She has published short stories in a number of art publications and literary journals. andreamason.co.uk

Not Denying Life, Not Denying Death
Bifocal Lens: The Picture of Dorian Gray (1945)
On closeness and leaving
Invisible Me
'Tango and the Close Embrace of Christmas' & 'Stilletos'