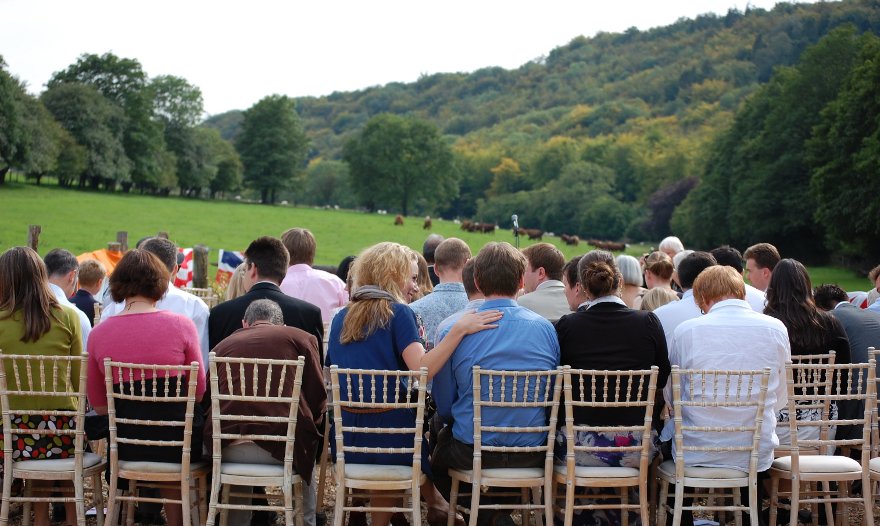 Funerals are strange events. When, earlier this year, my uncle died of problems relating to some five decades of chronic alcoholism, he was given, to reuse a phrase repeated frequently that day, “the most marvellous send-off”. Given that, alongside the booze, a devout Catholicism was one of the central constants in his life, the gilded columns and high church grandeur of St James's in Marylebone provided an entirely fitting setting for the occasion. For the last years of his life, he lived in a small top-floor flat just round the corner from the church, and was a frequent attendant at mass and other services. The genuine and obvious affection in which he was held by the white-robed priest shone throughout the service, and imbued the ritual movements and utterances with a painfully personal elegance.

It is not always this way. When I was about fifteen, my grandfather died. He was not a religious man, and his funeral was notable mostly for the way in which the priest repeatedly got his name wrong throughout the service. These little slips neatly exposed the hollowness at the heart of the ceremony. Fortunately my grandmother had long since gone deaf and so was unaware of what was going on, but for the rest of us it was embarrassing and inappropriate. My grandfather was a stickler for decorum: he would not have been impressed. Personally, I found the whole thing hilarious, but there's also a sadness that this is my abiding memory of the day, and, to some extent, the man.

It's a common experience – not the mistaken name specifically, but the overall sense that the established funeral formula is no longer appropriate for many people. That's certainly the belief of Poppy Mardall, who quit her job as a Deputy Director of twentieth century British art at Sotheby's in order to set up Poppy's Funerals in July this year. After her father was diagnosed with prostate cancer three years ago, Mardall and her family were forced to begin to think about death and about funerals, and she came to the conclusion that there was nothing offered by existing funeral directors that really met their needs. “My experience of funeral directors consisted of walking past their shops and seeing all the gold lettering and the headstones in the window, and all that sort of thing just really creeped me out,” she tells me over a cup of tea in the west London flat she shares with her husband. “It's an industry that really needs things to change.”

So what do Poppy's Funerals do differently? In short, they offer a simple cremation, which completely separates the cremating of the body from the funeral service. Some families do choose to attend the cremation, but just as many do not; in which case the ashes are returned to them, and they are then free to commemorate the life of their loved one in whatever way they wish. This means that instead of a formulaic funeral service, either in a church or the crematorium, the possibilities are practically limitless. “I'm here to encourage people to do whatever it is that they want to do,” says Mardall, “because I think each family knows what's best for them. One I worked with had a grand memorial at a local library; another just went to the pub with their mates; some have a big family lunch; others go for a walk. One family held the memorial at a local hotel where they celebrate all their major events – weddings, christenings, birthdays... It becomes less about death then and more about life,” she observes.

In the last hundred years or so, death has become a highly institutionalised, de-personalised process, controlled and mediated by doctors and lawyers, in care homes, hospitals and crematoriums. The consequence is that we don't properly think about it until it happens to us. As Mardall observes, “if things are distasteful they're taken out of sight. The word undertaker, for example, came from people undertaking responsibilities on your behalf that you didn't want to do. As time went on, funeral directors became more about taking responsibilities away from you. It was for all the right reasons, but the result is that we have no idea what is happening – in the same way that I have no idea how to change a plug.”

Mardall therefore advocates more personal involvement in the process. “Funeral directors serve a role in the community,” she says, “but they're not questioning the role of the funeral.” Which is exactly what she is trying to do. As she asks, pertinently, “How likely is it that you're going to have a meaningful funeral if you don't plan it yourself?” Poppy's Funerals then is about bringing back a sense of the individual into what has become, to some at least, a rigid set of increasingly meaningless rituals. “It doesn't necessarily help families that everyone wears black,” Mardall continues. Not everybody is reassured by bowing and ashen faces and black clothes and hearses and limousines. There's an assumption that that means dignity and respect, but it's not true for all families.”

To some extent it's about “stripping away all the pomp”, but another major advantage of the simple cremation is the cost. According to Cowling's Good Funeral Guide, the average cost of dying in London in 2010 was £8,020 (including administration of the estate), making it the most expensive place to die in the UK. But by using simple, unvarnished wooden coffins with calico cotton linings, and taking the 9 or 10am booking at a crematorium, a simple cremation through Poppy's Funerals costs just £1,750.

This simple approach reminds Mardall of one of the other moments that led to the desire to change the way we approach funerals: the death of the family basset hound, Wellington – photos of whom still adorn her mantlepiece. “He was the most important member of our family, she says. “When he died, we were in Hampshire where Mum and Dad run a business, and that day we took his body down to the Isle of Wight, which is where I'm from, and we dug the hole, wrapped him in his favourite blanket and buried him. And without being cheesy, it was by far the most meaningful funeral that I'd ever been to – we were doing something ourselves to honour the life of this animal that we loved.”

It was one of the factors that contributed to this new career, which is so different to Mardall's previous one as an art history expert. “Of course, you're dealing with a lot of pain and loss and I was ready to be badly affected by that,” she says. “But I actually feel really good about finding a way to help people – engaging and helping with people directly is quite reassuring. They were going through all this anyway and I've had the honour of helping them. It makes you feel much more grateful for life.”

Mardall hopes that through her endeavours a wider cultural shift might occur. And the speed at which her name has spread – at the time of writing, the company has carried out eleven cremations in only fourteen weeks of existence – suggests that the time is right. Mardall draws parallels with the birth movement – it's just happening some 30 years later. “When my mother gave birth to me,” she says, “it was quite a male-dominated environment in which all decisions were made for you. But now, it's all about your rights and choices. Nobody would go into labour not having thought about how they might want the birthing experience to be.” Similarly, she stresses the importance of thinking about death before it suddenly confronts us: “It's not gory or morbid, it's just a fact. It's the only thing that will definitely happen to all of us and we should be better prepared.”